http://www.pinnacle.com/en/betting-articles/Pinnacle-Puzzle/pinnacle-puzzle-guess-the-number/6BH2XBN8QN9984S5
Over 1,600 of our customers played Guess the Number – the first Pinnacle Puzzle. All those entries have been summed, averaged and multiplied by two-thirds producing a winning number of 20. See if you were one of the three lucky first prize winners.

It was mathematically impossible for the winning number to have been higher than 66 because this would suggest the average of guesses was greater than the upper limit for guesses (100).

If all participants in Guess the Number picked a number at random the average of guesses should be 50 and the answer be 33.

Anyone applying level of processing would assume that the majority of participants wouldn’t guess at random which brings the likely winning number down, and if you continue to eliminate what are considered 'weakly dominated strategies' you would end up with a guess of 0, which is the theoretical answer.

The beauty of the game is that not all participants are rational, and the broad array of guesses which we received illustrates this point (see our infographic). So the winners were those who not only understood the game but also correctly gauged the behaviour of other participants who didn’t.

Guess the Number - What happened in practice

Theory aside, 's look at how Pinnacle's customers approached Guess the Number.

As our first chart shows 2% of guesses were in the range 67-100 which as the theory states were mathematically impossible.

The most popular guess was 33 which corresponds with the first level approach.

2.5% were sophisticated enough to give the theoretical answer of 0, which didn't account for the irrational participants.

The winners were the participants who were able to both understand how the game worked and accurately account for the behaviour of those that didn't.

There were 32 correct entries from which we drew 3 winners and 5 runners-up at random. Congratulations to: 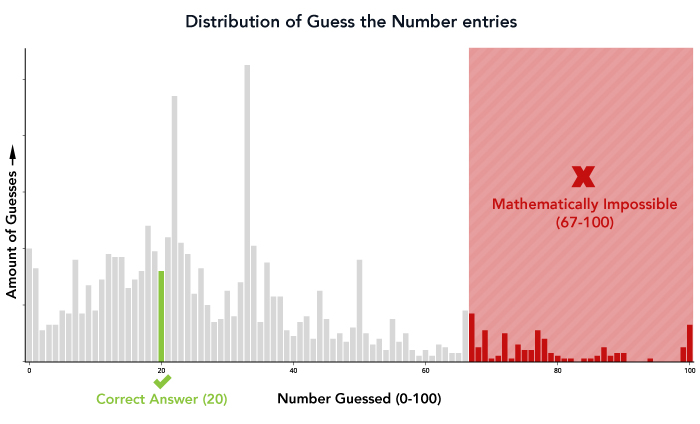 Guess the Number - Other factors to consider

There were other factors to take into consideration as well as a few clues. The layout of the entry form may have had some unintended influence requesting a number between 0-100 which may have acted as an anchor for participants. An anchor being a ready hypothesis that by human nature we tend to respond to whether relevant to the question in hand or not.

Given the low barrier to entry, many participants may have skipped the details and simply followed the simple instruction to pick a number between 0 and 100.

Of our competition isn’t the first example of Guess the Number, it is actually attributed to celebrated game theorist Alain Ledoux and has been tried many times before. A quick Google would have a revealed a Wikipedia page providing helpful clues while elsewhere online the result of the 1997 Financial Times version of Guess the Number is available which at 13 suggests its high-brow audience is more sophisticated than Pinnacle, but the first prize worth over $10,000 would almost certainly have resulted in contestants paying more attention to the nature and details of the game. A version run by the Danish newspaper Politiken which included 19,196 people, with a prize of 5000 Danish kroner produced a winning number of 21.6. 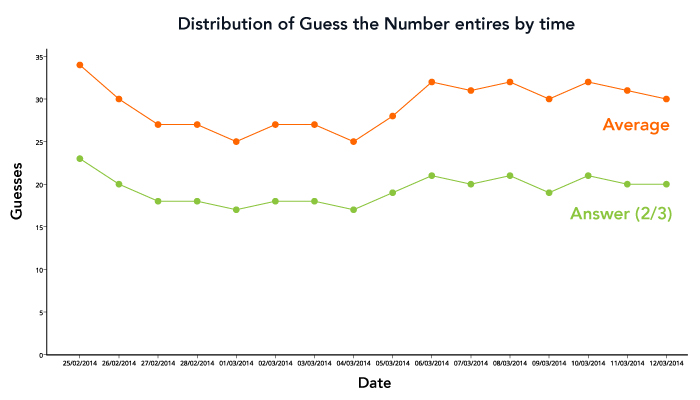