One man has reigned supreme in men’s athletics for the last decade. Usain Bolt is an eight-time Olympic gold medallist and holds the world-record in three different events, but what can bettors learn from his career? Just how special is Usain Bolt? Read on to find out.

If you bet on athletics, you may have followed the career of Usain Bolt with more interest than most. In 2008, the Jamaican sprinter exploded onto the scene winning three gold medals at the Beijing Olympics (the 4x100m medal was subsequently revoked after his teammate was retrospectively disqualified for doping offences).

Bolt’s world record of 9.58 set at the 2009 World Championships in Berlin shouldn’t have occurred for at least another 20 years.

In amongst the distractions of his showman persona, Bolt has produced countless self-assured performances in the last ten years that have seen him labelled as the greatest athlete to ever walk the earth. As entertaining and impressive as his career has been, the value in betting on Bolt to win major events shouldn’t be forgotten.

Ahead of the IAAF World Championships in London on August 5, this analysis of Bolt’s career will help give a bettor's an understanding of what his achievements mean and how magnificent they are.

Bolt’s career: An in-depth look at the statistics

Although the objective of athletics events is to run faster, jump higher or throw farther than other competitors, athletes are also competing against history - breaking a world record is one of the most prestigious achievements in the sport. Analysing Bolt’s record-breaking times in the 100m and 200m gives some perspective on just how good he is. 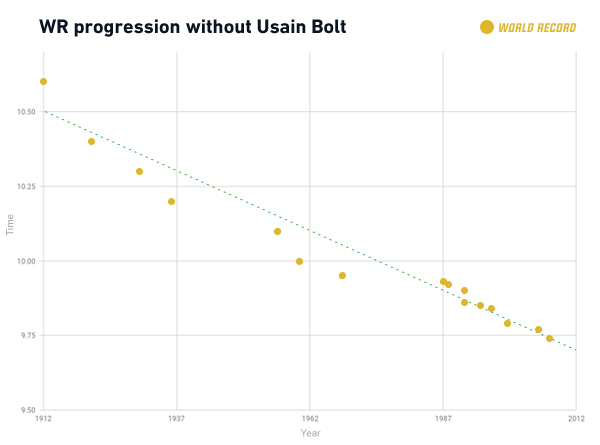 Using the chart above, we can see there is a clear trend in the progression of the world record in the 100m. While there are big time differences between 1912 and 1968, the amount shaved off the record has decreased over time at an average of 74.6 milliseconds per decade (a point first noted by David Sumpter in his book, Soccermatics). 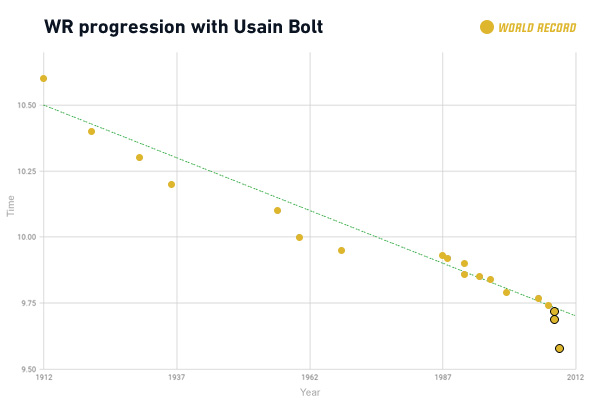 When we include Usain Bolt’s impact on the world record (as seen in the chart above), it becomes clear how he is like no other sprinter before him. Bolt took 0.16 seconds off the record between May 2008 and August 2009 (three different runs) - a feat that took 16 years before Bolt started competing.

Using the trend line from the chart and the average rate at which the record is broken, we can predict that Usain Bolt’s world record of 9.58 set at the 2009 World Championships in Berlin shouldn’t have occurred for at least another 20 years.

What do we learn from Bolt's past odds?

There is no doubt that Usain Bolt’s career stats show he is the greatest sprinter there has ever been. Given that he has won almost every race at the major championships he has competed in, bettors may assume there is value in betting on the Jamaican.

A closer look at the odds highlights how valuable Bolt’s achievements have been from a betting perspective and what kind of patterns emerge in terms of odds movement.

Discounting his first major event (2007 World Championships), Bolt is yet to lose in the final of a major competition (he was disqualified for a false start in the 100m at the World Championships in 2011). It goes without saying that betting on Bolt in either the Olympics or World Championships over the last ten years would have returned a profit (only a bet on him to break the 100m world record in 2012 would have lost) but the movement of his odds are also telling.

The odds given above are the opening odds for each event. Due to the format of the 100m and 200m at both the Olympics and World Championships (qualifying rounds followed by semi-finals), it is to be expected that Bolt’s odds would shorten during the event. However, the biggest change regularly occures between the 100m final and 200m final.

Bolt isn’t running the 200m at the 2017 IAAF World Championships in London but the clear message from above is if you’re going to bet on Bolt, do it early. His first races may give an indication of his performance levels but by then, it will most likely be too late and the odds will have shortened drastically.

Will Bolt go out on top?

Many professional athletes often claim they want to “go out on top” and retire while they are still regarded as one of the best in the world. Bolt recently made an official announcement that the 100m and 4x100m relay at the 2017 World Championships will be his last races. So will he finish his career with his sublime record intact?

Much can be made of Bolt’s decision to not run the 200m but his recent form does show a steady decline in his previously unquestioned dominance. He isn’t losing races but the winning margin and ease with which he has crossed the line in first is no way near what we witnessed between 2008-2016. 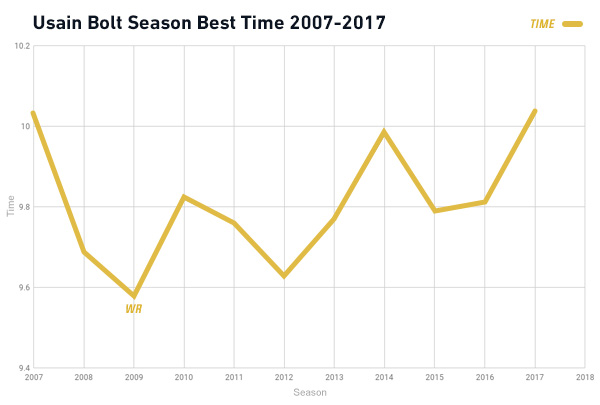 Since this article was originally published, Bolt has run his first sub-10 seconds 100m of the year. That said, question marks will certainly be hanging over the 30-year-old’s head in London. He has delivered on the big occasion so many times before, but whether he’ll do it one last time is a hard call to make.

Will we ever see an athlete like Usain Bolt again?

Given the rate at which the world record has progressed before Bolt and the change we have seen during his career, it hard to envisage someone having as big an impact as the Jamaican in the near future. Yohan Blake, Bolt's compatriot, has pushed him close on numerous occasions but at the major events, it's always Bolt that comes out on top.

Andre De Grasse - a 22-year-old Canadian - is another of Bolt’s main threats at the 2017 World Championships but with a personal best of 9.92 second, it doesn’t look like the world record will be changing anytime soon (De Grasse ran 9.69 seconds in Stockholm this year but was helped by an illegal wind of +4.8mps.

Get the best odds for IAAF World Championships betting at Pinnacle.