On November 4, the UFC returns to Madison Square Garden in New York City with UFC 217. There, middleweight champion Michael Bisping defends his title against returning all-time great Georges St-Pierre. Continue reading for the main factors to consider when analysing the Bisping vs. St-Pierre odds.

The gatekeeper vs. The prodigal son

Imagine it’s 2013, before Georges St-Pierre announced his retirement and someone told you this fight was happening. That year, GSP defeated Johny Hendricks for his tenth consecutive championship win; Michael Bisping, on the other hand, had lost two out of three fights and looked doomed to forever be the Ultimate Fighter champion who never even got a UFC title shot. How things have changed.

GSP shocked the world that year when, after defeating Johny Hendricks, he announced his retirement. Bisping, meanwhile, lost two of his next four fights before one of the unlikeliest career turnarounds in MMA history. Indeed, aged 35, he reeled off three wins (including a huge shock against Anderson Silva) before stunning Luke Rockhold to claim his middleweight world title in June 2016.

Now, after a four-year absence, GSP is back. Apparently tired of relaxing and a lack of pain or injuries, the French Canadian has the itch to compete (or perhaps, to earn a big paycheck), facing a man who had to be as unlikely as any to be reigning upon his return.

Looking at the above data, it appears bettors have had more respect for Bisping than his opening lines. In each of his last three fights, the best prices on Bisping were available early in the market only to drop when bets were placed.

St-Pierre, meanwhile, seemed to be showing some cracks in his armour before his retirement announcement. Hendricks had shown a remarkably tough chin and a powerful left hand that was capable of knocking anyone out, so that may have been a factor in GSP’s climbing odds before their fight.

Bisping vs. St-Pierre odds: The match-up

GSP is one of the great wrestlers in MMA history and that should determine a lot about Bisping’s approach. The Brit will ultimately want to keep things standing, where he’s generally done his best work over the years. Bisping has alluded to as much in his fiery pre-fight press conference exchanges with St-Pierre.

A volume striker, Bisping will do well to stick to his usual strategy of maintaining distance and peppering with low-percentage striking. That approach has resulted in ‘The Count’ landing 4.44 strikes per minute with 38% success, compared to opponents landing just 2.63 at 34% accuracy. Interestingly, though, this plays into the strategy GSP used late in his career.

Bisping's win over Rockhold was an impressive one and the size advantage isn’t irrelevant but his only title defence was against a 46-year-old Dan Henderson.

GSP’s reputation as a wrestler was so lofty that he was forced to develop himself as a striker, averaging 3.77 SLpM at 53% accuracy, while opponents managed just 1.38 SLpM at 28% accuracy. Essentially, they were so worried about the takedown that he could land a tactically placed punch almost at will.

Part of the success of that recipe, however, was reliance on size; GSP was the bigger man in almost every fight of his welterweight career. But the same certainly won’t be true in this middleweight bout.

Both of these fighters are accustomed to having the home field advantage, with GSP’s title defenses often happening in Canada and Bisping’s fights in England. Neither has that advantage this time around (although the guess is the crowd will be pro-GSP) and it will be intriguing to see how they react.

Bisping vs. St-Pierre odds: Where is the value?

The thing about predictions is that they rely on precedent and there’s little to be found here, similarly to the Floyd Mayweather vs. Conor McGregor fight. To project GSP, we need a top-five most dominant fighter of all-time sample with a four-year layoff. It’s never happened, which means we really can’t know what to expect.

One would have expected the markets to treat GSP as a solid favourite based on reputation and lack of recent ring wear alone yet that hasn’t been the case. While St-Pierre is the favourite, it’s only by a slight margin that might have been looked upon as laughable at the time of his retirement.

In each of his last three fights, the best prices on Bisping were available early in the market only to drop when bets were placed.

What we may be seeing is the lustre of the championship belt around Bisping’s waist. The win over Rockhold was an impressive one and the size advantage isn’t irrelevant but Bisping’s only title defence was against a 46-year-old Dan Henderson, while his own age also has to be a factor.

Either way, it’s bound to be a showcase fight played out in front of a phenomenal atmosphere, the kind you get only two or three times a year. It’ll be a worthwhile watch. 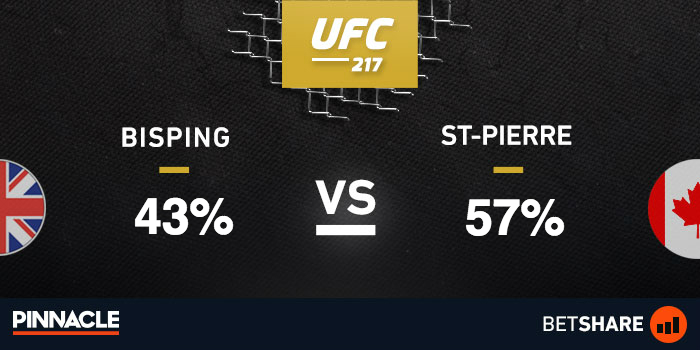