An in-depth analysis of a teams’ performance will help bettors make more informed decisions in ice hockey betting. With so many statistics to be analysed and various online sources available, it’s hard to know where to begin. Want to know what statistics are most useful when it comes to betting on ice hockey? Read on to find out.

Ice hockey statistics: Where to begin?

Sharp bettors will know that the use of data and statistics will help improve results in terms of betting. However, it is important to make sure you use the right kind of statistics. Once bettors know how to bet on ice hockey, they will want to move past the basics and begin to look at things like score effects, PDO and expected goals.

The official NHL website will be a popular choice for basic metrics but for more advanced analysis, the likes of Corsica Hockey will provide some useful insight.

Bettors need to be aware that ice hockey has several different strength states that can be analysed but the primary focus of this article will be 5-on-5 situations because they are the best representation of a team’s true ability and offer the largest sample size to work with.

Understanding score adjustments is the first step to properly analysing hockey statistics. These adjustments are made because of a well-researched phenomenon called score effects.

Basically, when a team is ahead in goals they tend to fall back into a defensive shell and play extremely conservative in order to protect their lead. Teams that are trailing will often abandon their defensive structure and take more risks in order to increase their chances of scoring.

Score adjustments are simply a method of weighting events. A team will get more credit for generating shots and chances with a lead and less credit for doing so when trailing. Not adjusting for score effects can lead to box score bias.

Here’s an example from October 7, 2017 when the Montreal Canadiens visited Washington to take on the Capitals. 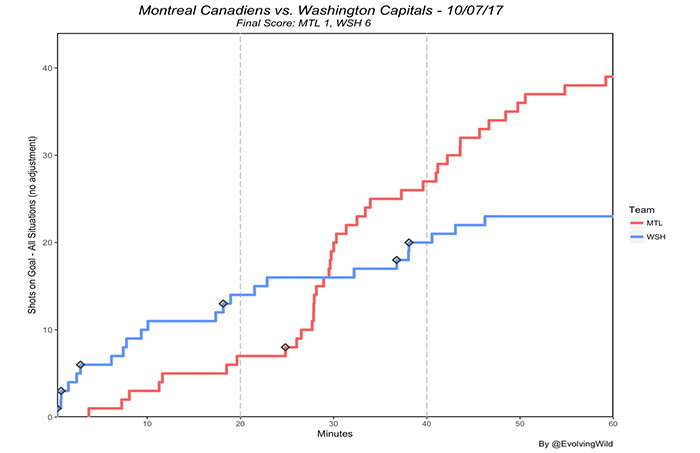 At the end of the first period, Washington led 4-0 and had outshot Montreal 14-7. Throughout the rest of the game, the Canadiens outshot the Capitals by a total of 32-9. The final score was 6-1 in favour of the Capitals yet the Canadiens held the edge in shots on goal, 39-23.

It’s easy to look at the box score and jump to the conclusion that the team that had more shots on goal was the better team, but that isn’t necessarily the case. Score effects add critical context to performance analysis.

What is PDO and why is it important?

PDO is a measure of variance. It’s named after the person who invented it and the letters don’t actually stand for anything. To arrive at a PDO number you simply add up on-ice shooting percentage and on-ice save percentage.

Bettors should note that PDO is not predictive of anything - its value actually lies in the fact that bettors can use it to make a gross assumption about level shooting and goaltending luck across the league.

PDO is basically shorthand for regression to the mean and in the NHL the mean is exactly 100. Every shot is either a goal or a save, so league shooting percentage plus league save percentage is always 100.

Obviously, some teams will consistently outperform (or underperform) their shots taken and shots against - this is because they might have an elite goaltender, elite shooting talent, or both. 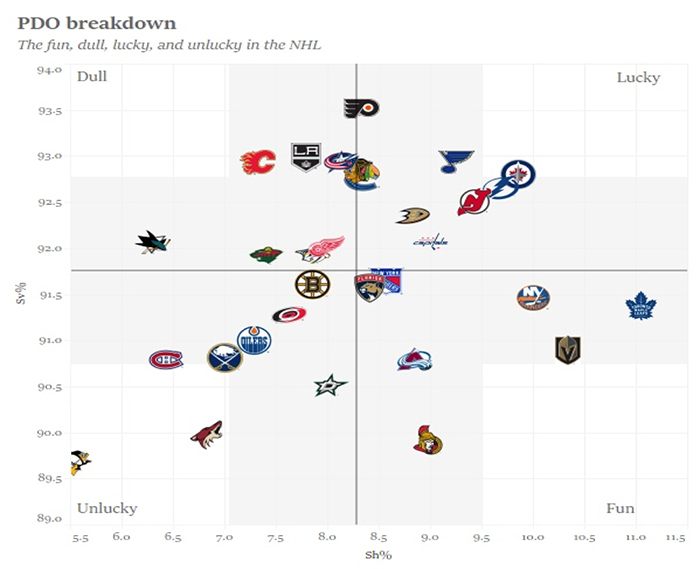 One of the most notable instances of PDO being used was in the lockout-shortened 2012-13 season where the Toronto Maple Leafs posted a 5-on-5 Score-Adjusted PDO of 103.11 through 48 regular season games.

The analytics community suggested that the Leafs would regress as the team’s performance was not sustainable. They were right - the Leafs lost to the Bruins in the first round of the Stanley Cup playoffs.

Goals are pretty rare and often random in ice hockey - over 90% of shots do not result in a goal. This is not to say that goal scoring isn’t a skill, but bettors should never discount the impact of a bounce. Analysing shot-based metrics will help bettors account for the influence of luck in ice hockey and will lead to more informed betting decisions.

Corsi is a statistic that measures shot attempts. It includes shots on goal, missed shots and blocked shots. It’s often cited in reference to puck possession although it doesn’t actually measure possession, it’s just a proxy. 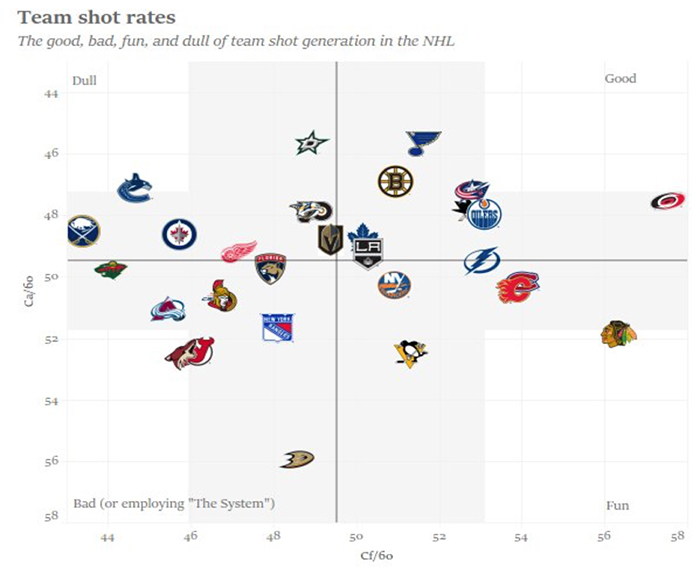 Fenwick is similar to Corsi except for one difference; it does not include blocked shots. In other words, Fenwick measures unblocked shot attempts. Both Corsi and Fenwick have predictive value and are repeatable skills.

Back in the 2011-2012 season, before shot-based metrics were as accepted as they are today, the Los Angeles Kings entered the postseason as the eighth seed in the Western Conference.

However, given that the Kings posted the best 5-on-5 Corsi For Percentage in the entire league, those that used shot-based metrics in ice hockey would have had them down as much better than the average eight seed team - Los Angeles went on to win the Stanley Cup and became the first and only eighth seed in history to do so.

Looking at underlying numbers like Corsi instead of just goals enables bettors to focus on the process instead of just the results. Of course, there are also limitations with these kinds of metrics (Corsi and Fenwick are often criticised because they don’t account for shot quality - meaning a floater from the point count just as much as a wrist shot ten feet in front of the net).

Scoring Chances are a subset of shot attempts but they leave a lot to be desired. Drawing arbitrary boundaries, as shown in the example below, can become troublesome when each team or analyst can have a different opinion on what constitutes a scoring chance. 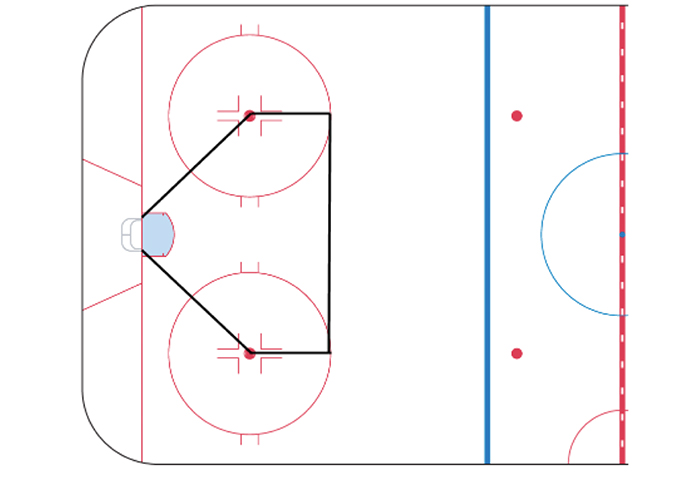 The solution to the aforementioned limitations for most bettors is to start thinking in terms of expected goals.

There are several expected goals (xG) models available to bettors but we’ll focus on the model created by Emmanuel Perry, owner and operator of Corsica Hockey. The model assigns a goal expectancy figure to every shot based on the following: 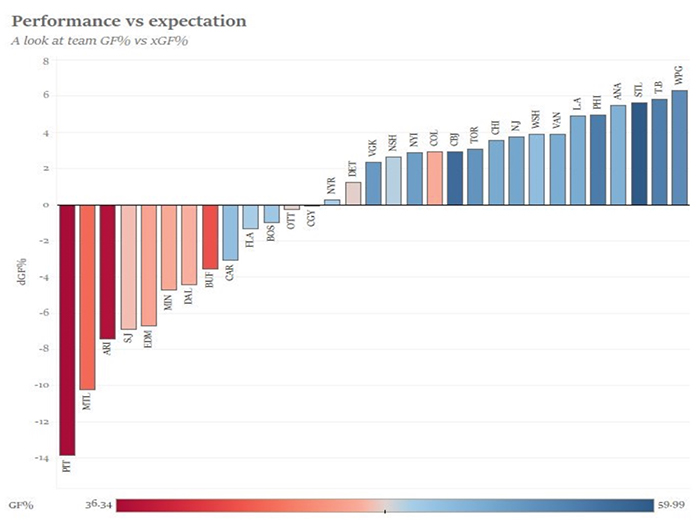 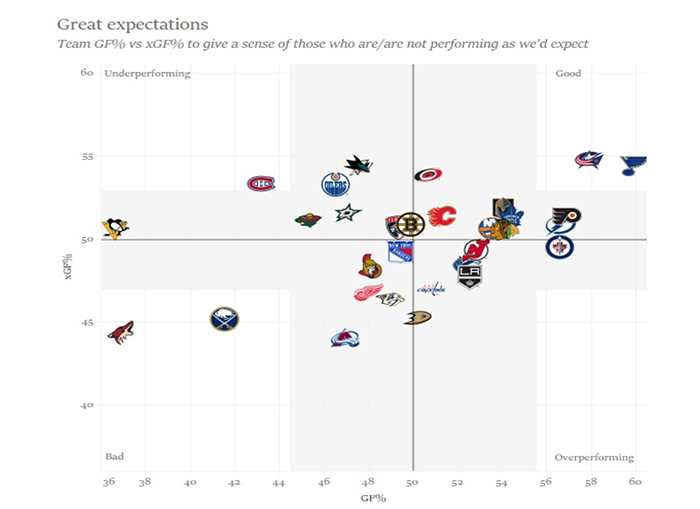 Part two of this article will focus on analysing individual player performance in ice hockey and explain how skater and goaltender specific stats can also inform your betting.

This article was written by @pucktails