http://www.pinnacle.com/en/betting-articles/Formula-1/Formula-One-betting-drivers-pole-conversion-rates/M6P2HTMGXWKK8BRZ
Securing pole position in qualifying gives a Formula One driver the best possible chance of winning the race. But how often do the best drivers’ convert, and who is the most successfully at converting pole positions into race wins?

Along with understanding the positive relationship between qualifying and final race position (click here), it is worth bettors noting which drivers have the highest pole position-to-race wins conversion rate.

From these 109 pole positions, the drivers’ converted their starting position into a race win 52% of the time. This is slightly higher than the overall ten-year average conversion rate of 49% across 142 races.

Statistically, the four drivers – Alonso, Vettel, Hamilton and Raikkonen â stand out from the other four drivers in the above sample.

These drivers have secured pole on 66% (78/118 races) of occasions over the past seven seasons.

Vettel alone has secured 39 pole positions – a remarkable 36% of all Grand Prix in the past seven years. Hamilton is the next closest with 27 poles in 118 races, which means between the two drivers they have secured pole position 59% of the time since the start of the 2007 Grand Prix season.

Spaniard Alonso may have only claimed pole position seven times since 2007, but he has converted five into victories, giving him the highest pole conversion rate of any of these top four. Raikkonen follows with a 60% conversion rate, while Vettel coverts just over half of his pole positions into wins, and Hamilton manages a lowly 40%.

Winning when not on pole separates the best from the rest

With nearly half of all pole positions converted into race victories over the last decade, we also looked at the ‘fab fours’ ability to win races when not starting from pole position compared to Button, Massa, Webber and Rosberg.

Hamilton and co. individually won 11.08% of the time when not starting on pole position, compared to just 2.64% for the rest â a huge decrease. 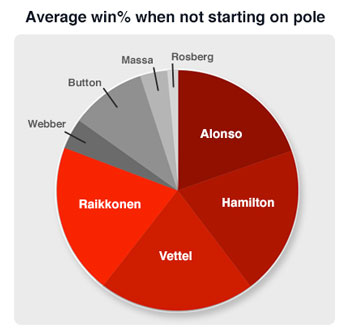 Intriguingly only slightly behind Vettel, Raikkonen has the 2nd highest average (11.11%) of race wins when not starting on pole. This may be reflective to the fewer number of pole positions (10.60%) he has secured compared to others.

Research is a Formula One bettors best friend

Looking at drivers’ pole conversion rates is not, on its own, sufficient enough to create an edge over the bookmaker. To be profitable in Formula One betting statistics should be gathered for track familiarity, weather, race strategy, tyre issues, car reliability and racing incidents, all of which would affect the likelihood of converting pole positions.

You will then be in a stronger position to make an informed decision about Formula One race winners.