http://www.pinnacle.com/en/betting-articles/Formula-1/Formula-One-Betting/7TN2HH7CY6KXCBM3
With inconclusive winter testing and no race data ahead of the first Grand Prix of the season on March 17th, bettors need ways to predict the Australian Grand Prix winner. Could qualifying serve as an accurate performance indicator for F1 betting?

Pinnacle crunched the numbers from the 2012 Formula One season and the last 10 Australian Grand Prix to see if F1 qualifying positions were a key indicator for the outcome of the race ahead.

The relationship between qualifying & finishing position

Despite some of the most exciting races of the season throwing the finishing order into disarray, there was a good correlation between qualifying and final race positions in the 20 races of the 2012 Formula One season. 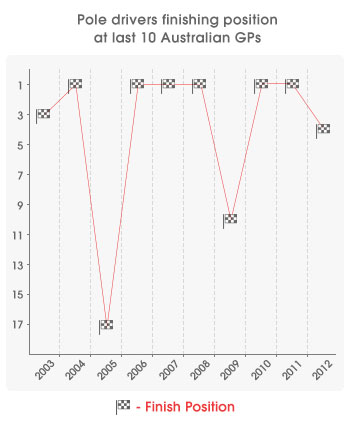 The correlation was 0.54, which indicates a strong link between a driver’s qualifying position and final race position. A correlation of “1″ would indicate that every driver qualified and finished in the same position, while “0″ indicates that there was no correlation at all.

Sixty percent of 2012′s races had a correlation above 0.5, which highlights that for more than half the season, qualifying provided a meaningful predictor of a drivers’ race performance.

In 2010 the FIA – Formula One’s governing body – looked into ‘leveling the playing field’ and making races more exciting for the fans.

The FIA announced the return of Pirelli as the tyre supplier in 2011 alongside a number of rules and regulation changes that have made predicting a race winner less certain.

The effect on racing brought about from the change in approach by the FIA is noticeable when the 2012 and 2009 seasons are compared. In 2009, 71% of races, showed a good correlation between qualifying and final race position, 11% higher than in 2012.

The 2009 Brazilian Grand Prix relationship between qualifying and finishing position was skewed because of a number of incidents throughout qualifying and the race. Qualifying was dominated by a tropical storm, which saw four championship contenders start from the back of the grid, while a crash during the first lap on Sunday resulted in three of the top ten retiring.

The unpredictable nature of Formula One

With 20 races situated across five continents, it is understandable to see why each circuit could have quite different individual characteristics. Each race gives the drivers, constructors and bettors new challenges and scenarios to take into consideration as both racetrack characteristics and weather conditions can dramatically alter the outcome. 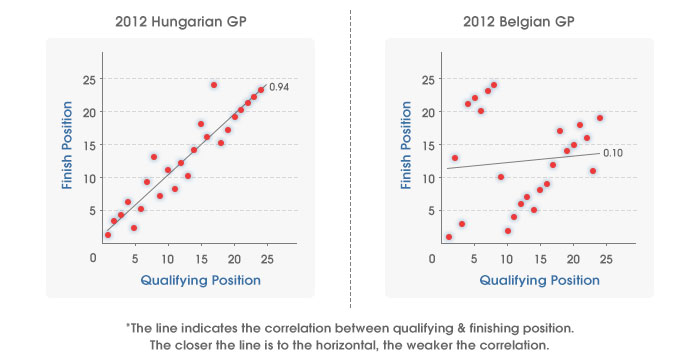 A comparison of the 2012 Hungarian and 2012 Belgian Grand Prix shows how different the relationship between qualifying and final race position can be. The track at the Hungaroring is notoriously difficult for drivers to overtake on, while the weather is almost always dry. As such, last season’s results produced a near perfect correlation of 0.94 between qualifying and final race position.

In contrast, after a five-week mid-season break, the Formula One travelling circus arrived at the Spa-Francorchamps for the Belgian Grand Prix. The notoriously unpredictable weather, and a number of difficult corners, make this track one of the biggest challenges to the drivers’ skill.

The relationship between qualifying and final race position in 2012 showed a near zero correlation (0.10). The result was nothing to do with weather, however – it was a huge first lap crash that eliminated five of the top ten on the grid.

A look ahead to the 2013 Australian Grand Prix

The paddock arrives at Albert Park on March 17th for the first Grand Prix of 2013. The teams and drivers line up with a new car after an inconclusive winter testing period that was interrupted by inclement weather, leaving everyone unsure as to how they compare against their rivals.

The Melbourne street circuit puts a major strain on tyres due to constant changes between turns and straights, coupled alongside the rough street tarmac. This will be a concern to the drivers who expressed their worries about the level of degradation on the new Pirelli tyres during testing at the Circuit de Catalunya. 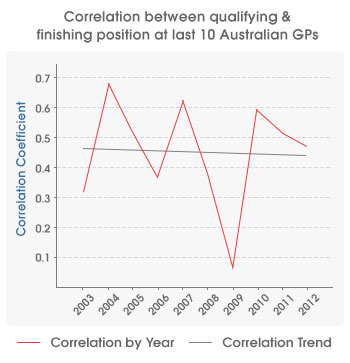 With a number of changes to team line-ups, the first Grand Prix of the year typically requires a conservative set up and strategy with minimal risks, as drivers become accustomed to their new cars, tyres and set-up.

Examining the past ten Australian Grand Prix gives us some indication as to how much weight Formula 1 bettors should place in the relevance of qualifying. There’s a solid correlation of 0.45 between qualifying and race position over the last 10 Australian GPs.

The lowest relationship between where a driver qualifies and their final race position was 0.08 in 2009, while the strongest association was 0.67 in 2004.

Interestingly, 60% of drivers who qualified first at Albert Park over the past ten years have won the race, while the average finishing position is 4th, which is where Lewis Hamilton finished in 2012.

Proving that there is a relationship between qualifying and finishing position is not, on its own, enough to generate an edge. Correlations must be established for each track, over a big enough sample to iron-out freak crashes, overlaid with more subjective factors such as weather, track characteristics, race strategy, tyre degradation and racing incidents. You can then be in a stronger position to make an informed decision about Formula One race winners.