The NFL season concludes on Sunday at the Hard Rock Stadium in Miami, when the NFC champions and top seed San Francisco 49ers take on the AFC champions and second seed Kansas City Chiefs. With both teams getting ready for the biggest game in the football calendar, who are the favourites and what should bettors keep an eye out for? Read on to inform your Super Bowl predictions.

Routes to the Super Bowl

The Chiefs, coached by Andy Reid, advanced from the AFC Championship game in the same manner through which they triumphed in the divisional round, overcoming an early double digit deficit with a performance underpinned by a faultless passing display from Patrick Mahomes.

Mahomes achieved three touchdowns and also topped the rushing charts with another 53 yards on the ground.

In the NFC, Kyle Shanahan’s San Francisco deployed a relentless pass rush to slowly wear down Green Bay, as the 49ers eased to victory via a run-heavy offence and efficient but rarely utilised passing.

As with most inter-conference games, these two teams have shared few opponents during the season. Kansas defeated NFC first seeds Baltimore at home by five points, while San Francisco suffered a three-point defeat against them on the road.

The usefulness of analysing San Francisco’s match against Green Bay, their other common opponent, is negated by the fact that it coincided with Mahomes’ two game injury hiatus. 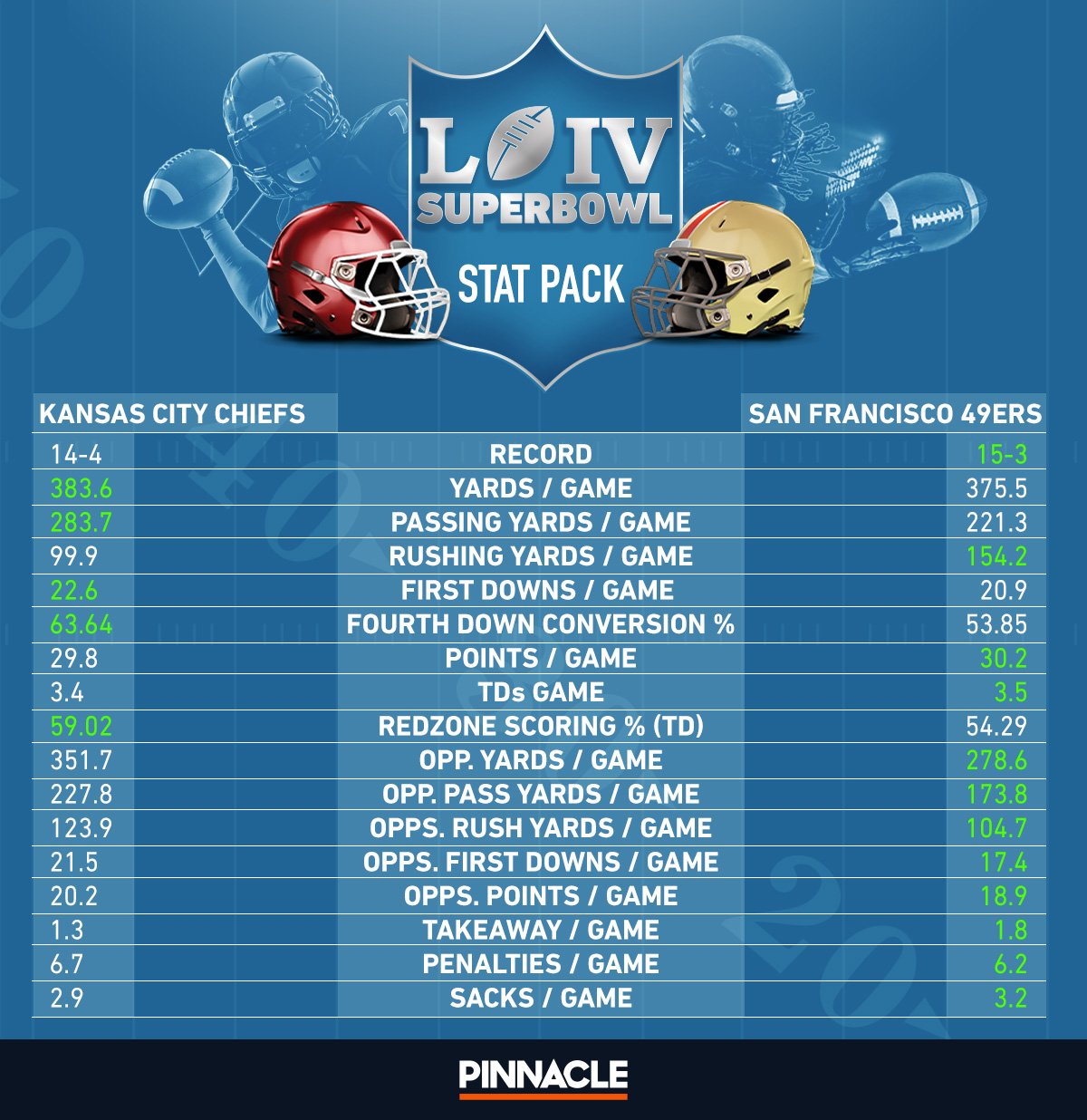 Overall, the defensive and offensive efficiencies of the opponents faced by Kansas and the 49ers have been broadly similar, although the latter have played against defences who have been slightly easier to score against.

The major statistical disparity between these otherwise well-matched teams comes on the defensive side of the ball.

Offensively, the teams are well-matched. Both pass for a yard more per attempt than par, although the Chiefs opt for the aerial approach approximately six more times per game.

However, this doesn’t hinder San Francisco, as highlighted in the NFC Championship match when they successfully exercised a game plan despite the fact that Garoppolo threw the ball just eight times.

Kansas have performed around the league average for opponent adjusted running efficiency, whereas San Francisco gain two-tenths of a yard per carry above par.

San Francisco just edge the regular season scoring rate, although the statistical advantage flips to the Chiefs when factoring in the strength of the defences faced.

KC scored nearly a touchdown more per game compared to par, whereas the 49ers were just a point behind, outscoring the opposition by an average of six points more than their usual concession rate.

The only major statistical disparity between these otherwise well-matched teams comes on the defensive side of the ball.

Both are excellent at defending the pass. The Chiefs have curtailed their opponent’s passing yardage per attempt by eight-tenths of a yard, whereas the 49ers have done even better, knocking off a league-best 1.5 yards per passing attempt by their opposition.

It is within the ground game where the only glaring disparity exists. San Francisco are just worse than the league average against the run, but the Chiefs allow nearly half a yard further per carry than their opponents gain on average and languish near the bottom of the league on this front.

This weakness isn’t always readily exploitable, as the Chiefs score quickly and their opponents are often forced to play catch up before they can control the game on the ground.

Despite this, the 49ers undoubtedly have the more balanced defence of the two Super Bowl rivals.

Green Bay’s Aaron Rodgers struggled mightily against San Francisco in the Championship game, although his passing ability has been declining for some time.

However, even Mahomes’ MVP credentials will be sorely tested against the league’s best passing defence, and he could struggle to pass the ball with even average efficiency.

San Francisco hold a huge advantage when matched with KC’s porous run defence. Although they may not pass frequently they still possess the option to, having passed with above average efficiency throughout the season.

This enables them to deploy the same tactic which allowed them to slowly grind out their Championship game win two weeks ago.

San Francisco vs. Kansas City: Who is the favourite?

Pythagorean matchups edge slightly towards the 49ers, despite both teams recording a similar number of narrow wins. Using just regular season scoring rates it is impossible to split the sides, with a 24-24 tie the expectation in the less rarefied scoring environment of a Week 1 to 17 contest.

It is difficult to justify installing the Chiefs as the outright favourites even with Mahomes’ mercurial brilliance.

Super Bowl LIII, when the Patriots overcame the Rams 13-3, was a low scoring aberration, with the remaining world championship games this decade averaging 53 total points. The heightened significance of the match should push Sunday’s expected total points into the mid-50s.

KC are the current favourites against the spread, based primarily on the unfavourable comparision between Mahomes and Garoppolo, particularly in postseason.

However, there is a clear route to San Francisco taking the trophy that would not require Garoppolo to be anything more than a game manager, and it is still difficult to justify installing the Chiefs as the outright favourites even with Mahomes’ mercurial brilliance.

Therefore, the San Francisco 49ers are taken with a small expected start for Super Bowl LIV this Sunday.