Week 1 of the 2019 NFL season through up a few surprising results and some notably one-sided games. This has resulted in some interesting line movement across different games, but what has caused this? In this article, @PlusEVAnalytics looks at NFL line movement through the lens of parameter uncertainty. Read on to find out more.

What happened in Week 1 of the NFL?

On September 8 2019, the Miami Dolphins were 7-point underdogs at home against the Baltimore Ravens in their Week 1 matchup.

This outcome had a significant impact on the lines for each team’s Week 2 game. Baltimore, which had been favoured by 9.5 at home vs. Arizona in the lookahead markets, opened at -14 before settling at -13 at the time of writing – a line that implies the Ravens are a top tier club rather than an average one.

Miami, which the lookahead lines had as +11 at home vs. New England, opened at +18.5 – suggesting that the market has downgraded the Dolphins from “bad” to “historically awful”.

Where does parameter uncertainty come in?

How do we rationalise this extreme level of movement? The NFL market is thought to be one of the most efficient in the world. Did it really miss the mark by that much in Week 1? Or is it really missing the mark by that much in Week 2, a set of games that is sometimes nicknamed “Overreaction Week”? Or both? Or neither? Let’s examine this question by digging deeper into the concept of parameter uncertainty.

Suppose we knew that the Ravens were an 8.0 win team and we knew that the Dolphins were a 4.3 win team. Neither team has significantly changed its composition between Week 1 and Week 2, so it would stand to reason that we’d expect the same performance from each of those teams in Week 2 that we expected prior to Week 1, and there wouldn’t have been any change from the lookahead lines to the Week 2 lines. So is the market irrationally overreacting? Not necessarily!

The key lies in a seemingly innocuous translation that we’ve made - from “8.0 expected wins implied by Pinnacle’s regular season win lines” to “we know that the Ravens are an 8.0 win team”. Is it possible for this translation to be wrong, without violating the principle of market efficiency?

Markets are continuously absorbing and assimilating new information. So a big change doesn’t necessarily mean that the markets got it wrong either before or after, just that they’re learning!

This would result in an overall expectation of 8.0 wins, just like it would if we had 100% confidence that the Ravens would be an 8.0 win team. The difference is that we’ve introduced the idea of parameter uncertainty.

The answer to the above question brings us back to Week 2. If there is no parameter uncertainty, then observing an outcome is like observing a roll of a die or a spin of a roulette wheel – it teaches us nothing about the universe that we didn’t already know. But in a world of parameter uncertainty, we can use the outcomes as we observe them to change our estimates of the meta-distribution.

Let’s assume that the margin of victory (home team points less visiting team points) in any given game follows a normal distribution, and that all points are equally valuable. These are not suitable assumptions for a real betting model, but they allow us to illustrate the concepts with a limited degree of complexity. 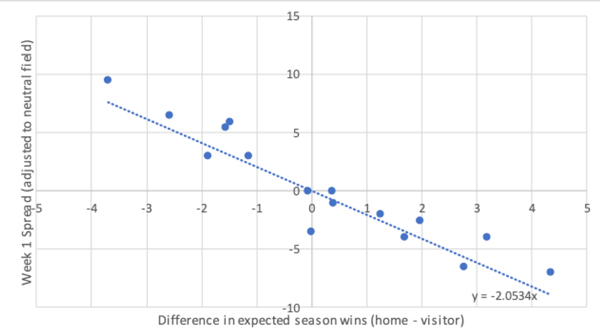 Now, we can construct a hypothetical point spread for each of the nine combinations of both teams’ meta-distributions:

Now it’s time to integrate our learnings from Week 1 into our meta-distribution. To do that, we work backwards: “For each cell in the meta-distribution, how likely is a 49-point Ravens victory”?

All of the numbers are very small – a 49 point victory is a rare occurrence in any circumstance! To make them easier to interpret, let’s look at them on a scale relative to the center cell:

In the top right corner we can see that the 49 point victory is 3.86 times as likely in the “Ravens are a 9.0 win team and Dolphins are a 3.3 win team” cell of the meta-distribution compared to the “base” cell in the center.

Next we apply Bayes’ Theorem, which gives us a set of instructions for incorporating new information into a meta-distribution:

We can now conclude that after Week 1 the market now believes:

Averaging those values together, the expected win total for the Ravens is now 8.42. Using the guide of two points of movement for every win, that means that according to our model the Week 2 line should shift by 0.84 points in the Ravens’ favour.

Obviously the actual movement was much more dramatic than that, meaning that something in our model was off – most likely the prior meta-distribution of 1/3, 1/3, 1/3, because I made it up arbitrarily as an example!

The mechanics are beyond the scope of this article, but here’s what our model would look like if we used a more realistic meta-distribution instead. Overreaction? You’ll have to be the judge of that! 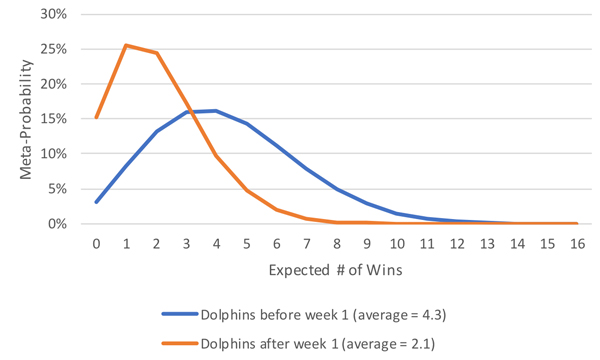 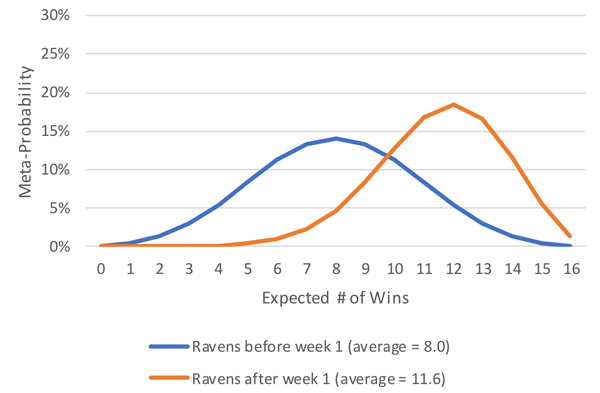 In conclusion, market efficiency is not retroactive. Because of parameter uncertainty, markets are continuously absorbing and assimilating new information. So a big change doesn’t necessarily mean that the markets got it wrong either before or after, just that they’re learning!

This guest contribution was made by one of our Twitter followers - @PlusEVAnalytics.