Along with the NFC East, the AFC North has been the most active for divisional matchups in the early weeks of this season. Baltimore entertain Pittsburgh in our highlight game, meaning the Ravens will already have played all of their nearest rivals after this weekend. Is there value in the Steelers vs. Ravens betting? Read on for some expert insight into the Steelers vs. Ravens odds.

Steelers vs. Ravens betting: No rest for Baltimore

The Ravens are returning from a depressing trip to London for the first of this season’s International Series of games. They were trounced by seasoned travellers, the Jacksonville Jaguars, including being held scoreless through the first three quarters, culminating in quarterback Joe Flacco being replaced with the game well out of reach.

The Ravens must bounce back against their bitter divisional rivals without the aid of the bye week - something that has almost always followed a trip to London. Only Indianapolis in 2016 has been required to play immediately after a match at Wembley Stadium. Indianapolis did win despite their quick turnaround in 2016, but similarly, Flacco must perform after his worst regular season career start against Jacksonville.

We do have more data on the latter scenario and since Flacco entered the league in 2008, he has followed up his worst performance of the regular season with one that either equalled or exceeded his average performance over the whole campaign; showing that he has been consistently able to put one very poor performance behind him.

Pittsburgh are the more accomplished team, but they are on the road in a rivalry that has frequently been decided by a touchdown or fewer points.

Last season, Baltimore were a dead average 8-8 team. They did have a small, positive points differential, but this was balanced out by one more win than losses in close matches and a small positive turnover differential.

In keeping with the Baltimore defensive powerhouse from Super Bowl XXXV, the defensive side of the 2016 vintage partly carried a lacklustre offence, while falling well below the standards set by their epic unit from the turn of the century.

In 2016, the Ravens were most effective defending the run and were still above average against the pass, allowing two fewer points per game to be scored than the average output of their opponent.

The passing game has now been in the hands of Joe Flacco for ten seasons and while Super Bowl success and a regular playoff presence have been delivered, statistically he remains consistently below elite levels.

Now in his thirties, Flacco has begun to fall prey to injury, he missed half of 2015 and a reoccurring back injury was cited as a partial cause of his well below par showing in London.

Pittsburgh’s quarterback, Ben Roethlisberger has been in the league for four years longer than Flacco and they’ve gone head to head on 15 occasions, either in the regular or postseason.

Against broadly similar schedules, Roethlisberger has proved more efficient than Flacco in terms of yards per passing attempt in each of their nine shared seasons of AFC North competition.

Pittsburgh should be able to pass with average efficiency, whilst Flacco may struggle, particularly if his offensive line fails to improve on their disjointed display against the Jaguars.

But with the influence of Baltimore’s defence, the actual head to head encounters are slightly less one-sided, with Roethlisberger proving more efficient in 10 of the 15 meetings and this split is reflected in the W/L record of 9-6 in favour of the Steelers.

Despite a close season where he speculated about retirement, Roethlisberger remains a top ten quarterback who can pass accurately, even under the most intense defensive pressure. He was worthy of his place in last year’s Pro Bowl and is joined by a set of offensive skill players who are capable of returning to the postseason.

The average margin of victory has been nearly nine points when both quarterbacks start, but this is skewed by three wide margin wins and the median margin of just four points is perhaps a better indicator of how closely fought these matches tend to be. The average and median total points is 42.

Albeit slightly flattered by an 11-5 regular season record that led to defeat in the AFC Championship game in 2016, Pittsburgh’s underlying stats were superior to those of Baltimore.

Their offence was above average through the air and on the ground. They averaged a field goal more than their opponents usually conceded and a broadly average defence depleted the average scoring rate of their opponents by a point and a half per game.

Steelers vs. Ravens betting: Where is the value?

Offensive and defensive matchups favour Pittsburgh on Sunday. They should be able to pass with average efficiency, whilst Flacco may struggle, particularly if his offensive line fails to improve on their disjointed display against the Jaguars.

The situations are reversed on the ground. Baltimore are favoured to do better than the visitors, although both defences should limit their opponents rushing efficiency to below average levels.

Opponent adjusted scoring rates favour Pittsburgh by three points and a total of 42 points, but home field advantage swings the matchup back to a stalemate and although we are dealing with an ever decreasing sample sizes, the majority of Flacco led victories over the Steelers have occurred in Baltimore.

Pittsburgh are the more accomplished team, but they are on the road in a rivalry that has frequently been decided by a touchdown or fewer points and even a wounded Ravens side should prove competitive, especially if the spread creeps towards a full field goal start for the host team.

Who is the most popular bet?

This BetShare shows the percentage share of total bets in the Steelers vs. Ravens Money Line market. 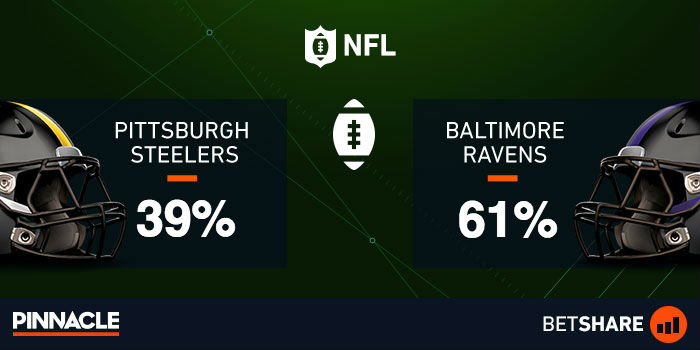