The 2017 NFL schedule as paired the talented and competitive NFC East division with the AFC West and the first of these enticing matchups takes place on Sunday. Indeed, the 1-0 Eagles travel to the Kansas City Chiefs, who upset Super Bowl winners New England on opening Thursday. But our focus lies with the second out-of-conference game, taking place in the second phase of Sunday games when Dallas travel to Denver.

Peyton Manning led the Denver Broncos to Super Bowl glory back in 2016, although the legendary quarterback was both injury prone and a pale imitation of his former self, playing in the shadows of Denver’s dominant defence.

In the same season as Denver's last Super Bowl sucess, Dallas had an established elite passer in Tony Romo. Yet, in the intervening seasons, ageing players and injury have left both of Sunday’s sides in need of a new starter in the NFL’s most important position.

Denver’s succession from Manning’s last hurrah to a quarterback of the future hasn’t been smooth – nor does it appear particularly well planned. Brock Osweiler was earmarked as Manning’s successor and his early contribution in Manning’s absence exceeded that of the veteran.

However, he left for Houston and in 2016 Denver turned to 7th round pick Trevor Siemian, who beat out their first-round selection Paxton Lynch, both in 2016 and again during this current training camp.

The mainstay of Denver’s likely success is still built on defence. Offensively in 2016, Denver were below par.

Siemian’s numbers were on par with Osweiler’s from the second half of 2015. He’s a competent passer with time to improve, along with the depth of talent Denver has provided him with in the receiving positions. But the mainstay of Denver’s likely success is still built on defence. Offensively in 2016, Denver were below par.

They passed for 6.5 yards per attempt against defences that on average allowed a full half a yard more and were a similar half a yard shy of the average yardage per rush allowed by their opponents. Ultimately, they were a below-par scoring team and could only manage just under four points per game fewer than their opponents habitually allowed.

Defensively, the Broncos were stifling against the pass, clipping over a yard and a half from the average yards per passing attempt achieved by the teams they faced in 2016. They were more generous to rushing attacks but scoring was made extremely difficult.

Denver faced high-scoring offences in 2016 but the Broncos reduced their average rate of scoring by over seven points per game. The Broncos Pythagorean wins were in line with their 9-7 record in a tough division; they had just one more narrow loss than wins and their turnover differential wasn’t extreme.

Dallas’s yards per pass attempt was nearly a yard in excess of what is typically allowed by their opponents and their ground game was similarly dominant.

Like Denver, Dallas had to deal with a disrupted quarterback situation due to Romo’s recurring injury woes. However, they fared much better than the Broncos. Dak Prescott was picked in the fourth round of the 2016 draft, primarily as Romo’s potential backup, but became the starter when Romo succumbed to pre-season injury.

Prescott’s rookie campaign was astonishingly good. He didn’t quite reach the sustained heights of Romo’s last full season in 2014 yet his completion rate was comparable and his yards per pass attempt fell only half a yard shy. A capacity to avoid mistakes, consistency and a running threat already marks him as a near top-ten current quarterback – regardless of his rookie status in 2016.

Defensively, they didn’t match Denver on yardage indicators, being slightly below par through the air and just a bit better than average on the ground. But they did restrict their opponents’ scoring to nearly four points below their usual points-per-game scoring average.

Prescott’s rookie campaign was astonishingly good. His completion rate was comparable to Romo's last full season and his yards per pass attempt fell only half a yard shy.

Dallas in Prescott’s rookie season were ripe for regression following a four-win season in 2015, fuelled by largely unsustainable records in turnovers and games decided by a touchdown or fewer points. However, the reverse is largely true in 2017. In NFL betting, it is often important to consider cyclical performance.

The Cowboys had a large positive differential during wins in narrowly decided games. They outshone their Pythagorean win percentage and had a small but positive turnover differential. That makes this upcoming game intriguing from a number of angles.

Cowboys vs. Broncos betting: Where is the value?

Based on yards-per-play performances adjusted for opponents during the 2016 regular season, Dallas are marginally the better team. But this advantage flips to Denver by a single point with home advantage.

Conversely, much of Dallas’s advantage accrues from their rushing attack, matched to Denver’s run defence. The problem here is that the participation of Dallas’s star running back Ezekiel Elliott is in doubt, as his potential six game ban re-enters the courtroom following his appearance in the season opener against the Giants.

A points-based approach sides with Dallas by 2.5 points even on the road and this may be enhanced by Denver’s relatively short week, having entertained LA in the guise of the newly relocated Chargers in the Monday night double header. The total is pitched around 40 points as both offences look to be up against it in their respective matchups.

Dallas potentially offer the most value, but only if they aren’t asked to cross the key number and give up three points or more – and providing their team selection isn’t subject to a federal judge.

Cowboys vs. Broncos betting: Who do bettors favour?

The BetShare below shows which side is most popular in terms of the total number of Money Line bets for the Cowboys game against the Broncos. 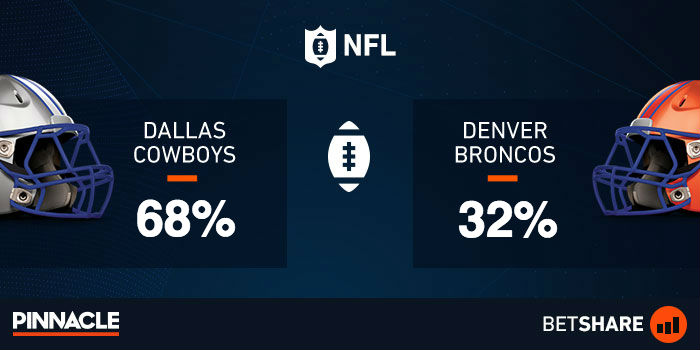