As we enter Week 9 of the NFL season, the likely postseason contenders are coming to the fore. The Jacksonville Jaguars and Cincinnati Bengals meet in this weekend’s highlight game with both sides needing an uplift in performance to make the playoffs. What do the Bengals vs. Jaguars odds suggest? Read on for some expert Bengals vs. Jaguars betting insight.

Are the Jaguars stuck in a rut?

The periodic waxing and waning of fortunes that is a feature of most NFL franchises across the seasons have largely passed by the AFC South’s Jacksonville Jaguars.

2007 was their last winning season and postseason campaign and the most recent six seasons has seen their regular season win totals bump along in a narrow range between highs of five wins and lows of just two.

Along with a significant minority of NFL teams, Jacksonville’s stagnation can largely be traced back to a lack of talent at quarterback. They are currently led by Blake Bortles and although there is no disgrace in disappointing during your rookie season on a losing side, his progression has been only incremental.

The Jags are coming off their bye week, whereas Cincinnati won a laboured one point victory over back-up led Indianapolis

Bortles was in the bottom two for the 2014 season in both interception and sack rates amongst regular, starting quarterbacks and whilst these figures have gradually improved, neither has it elevated his status above that of a competent backup, particularly in his tendency to throw picks.

Completion rates have yet to break the 60% barrier and Jacksonville’s solution to the quarterback quandary has been to restrict Bortles’ throwing attempts in 2017, with only six regular starters throwing fewer attempts per game so far.

This approach has contributed to an averagely efficient passing side, with the rushing game taking up much of the workload with above-average performances.

Points have been relatively easy to come by for the Jaguars this season - they have scored 26 points per game against defences that on average yield just 23.

However, much of the credit should go to the defensive side of the ball where a healthy, if partly unsustainable, turnover differential has turned opposing drives into excellent starting field positions for the Jaguars’ offence and the occasional pick six.

Jacksonville’s impressive points differential of over ten points per game has been won in a partly unconventional, defensive driven way and while they are improved and competitive in the largely undistinguished AFC South, they are far from a rounded, well-balanced team on either side of the ball.

The Jaguars only trail the Rams and Philadelphia in terms of points per game differential in 2017, whilst the Bengals are firmly mid-table.

The stars in Jacksonville are the defence, although they too are not without flaws. They have struggled against the running game, allowing 5.2 yards per carry against team’s who habitually amass just 4.2 yards per carry. It is a problem they have sought to address, trading future draft picks for new blood and bulk.

When playing with a lead (where opponents are increasingly forced to take to the air) the Jags are historically amongst the very best against the pass. Sample size does only account for under half a season, though, and their excellent figures are partly dependent upon opponents becoming one dimensional and pass orientated.

Teams attempting to pass against Jacksonville are seeing their usual average yardage per attempt reduced by more than 25%, such is the talent in the league’s current top-rated pass defence.

The strengths and deficiencies of the 2017 Jaguars is epitomised in their 30-9 win in Pittsburgh. Both quarterbacks posted their worst performances of the season to date and the Jags defence scored two touchdowns from interceptions.

Will Cincinnati make the postseason?

If the Jags are a 4-3 enigma that may unravel as the season progresses and defensive contribution to the scoreboard begins to cool, their opponents, the 3-4 Cincinnati Bengals are looking to return to the postseason from the competitive AFC North.

2016 was the first time the Andy Dalton led team had missed out on postseason action since 2011 - a laudable achievement in a division that also contains Pittsburgh and Baltimore.

2015 aside, when Dalton produced a top-five quarterback performance before a broken thumb ended his season in week 14, the Bengals passer has struggled to emerge from the mid-ranked pack of quarterbacks, despite leading the Bengals to largely uninterrupted success.

Protection issues have contributed to another stuttering season. Dalton is throwing with below average efficiency as measured by his yards per attempt. He is also on course for a career-high sack rate and interceptions are also running at career-high levels.

Their ground game is also sub-par and a turnover differential that is as bad as Jacksonville’s is good, has left the Bengals defence with few points to defend.

The offence has broken the 30-point barrier just once (against the 0-8 Cleveland Browns).

Cincinnati’s defence is a solid, top ten, balanced unit, equally proficient against both the run and the pass and able to restrict opponent’s to two fewer points per game than they habitually score.

When playing with a lead (where opponents are increasingly forced to take to the air) the Jags are historically amongst the very best against the pass.

Statistically, Jacksonville would be favoured by over a touchdown, but it would be foolish to ignore the situational factors that have allowed their defence to excel in the games that they have won and also to ignore the likely transient nature of the defence’s scoring contribution.

They trail only the Rams and Philadelphia in terms of points per game differential in 2017, whilst the Bengals are firmly mid-table. If we do strip out the scoring contribution made by the Jags’ defence, they still maintain a top five position for points differential.

The Jags are coming off their bye week, whereas Cincinnati won a laboured one point victory over back-up led Indianapolis. A winning margin a point shy of a touchdown for Jacksonville seems likely, with both offences struggling to break a combined 40 points total. 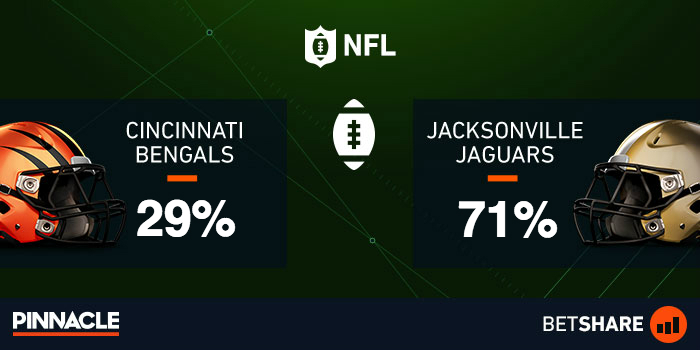