One of the major attractions of the NFL is the competitive nature of the competition. Eight different teams have been crowned Super Bowl champions in the last ten seasons and thirteen unique sides have emerged victorious since the salary cap was introduced in the mid-1990’s. But why is the NFL more cyclical in terms of performance compared to other sports? Read on to find out.

There has been a very good chance that supporters of a particular side will have experienced successful seasons in the NFL, be it a divisional success and a playoff run or conference titles at some period during the last 20 or so campaigns.

Even with Leicester’s unexpected success in 2015/16, only five different sides have lifted the Premier League title since the mid-1990’s and one side - Manchester United - has won half of the titles since Blackburn’s triumph in the early years of the competition.

What makes the NFL unpredictable?

Format inevitably plays a part in the relative unpredictability of the NFL. A 16 game NFL season, with a skewed strength of schedule, it is short in length with a knockout stage in the post season that is ripe for upsets, even with the better teams enjoying home field advantage.

The financial structures of each competition to what we consider to be the norm. It drives the competitiveness in the NFL, while helping to maintain the status quo in soccer’s English Premier League - even with the beginnings of a financial fair play system from 2014.

Since the mid 90’s, 27 of the 37 franchises who have played in the NFL have recorded cumulative win percentages that lie between a low of 0.4 and a high of 0.6.

Financial inequality in the Premier League allows the best to continue to attract and buy the best players, but the salary cap and particularly the draft system aims to spread the talent throughout the NFL.

Allowing the sides with the worst records in the previous season to have the earlier pick of the college talent via the draft, in theory, boosts the chances of those who struggled the season before and this egalitarian concept has largely worked.

Only a handful of sides have cumulative win percentages below 0.4 over the period, notably Cleveland, Oakland and Detroit, with a similarly select few beating 0.6; Green Bay, New England, Denver and Pittsburgh. As ever, cumulative averages hide many extremes of performance in individual seasons.

For example, Arizona has averaged a slightly sub 0.5 cumulative win percentage since the mid 90’s, but individual seasons have included a win % above 0.75 and a low of below 0.2.

Cyclical performance in the NFL

We may be seeing evidence for the gradual cyclical shift of power, where successful sides gradually become less successful as they restock with lower draft picks and their star players begin to age or suffer an injury related decline - this is certainly worth consider in NFL handicap betting.

We may be seeing evidence for the gradual cyclical shift of power, where successful sides gradually become less successful.

This is then followed by a resurgence, as their declining win record begins to entitle them to higher draft picks, just as those teams who have replaced them as the league’s leading contenders begin their own decline.

The cyclical nature of an NFL side’s performance is unlikely to follow a smooth pattern.

What contributes to cyclical performance?

High draft picks aren’t always a guarantee of future success. Ryan Leaf’s short and unsuccessful career (which started at San Diego) after being a number two pick is one such example. Additionally, hidden gems can be found in the sixth round - Tom Brady, widely considered as the greatest QB of all time, was the 199th overall pick in the 2000 NFL draft.

Excellent or incompetent team building or coaching can also enhance or squander the opportunities available to a team, while injuries can stymie even an expertly crafted side. Along with the ever present randomness that occurs in a relatively short season, culminating with knockout football.

However, there should be enough signal in the seasonal totals achieved by a side to be able to spot this general ebb and flow of talent related performance, particularly if the data is slightly smoothed. 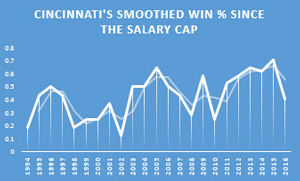 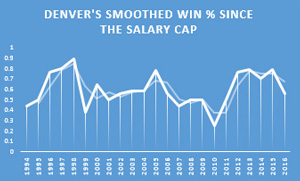 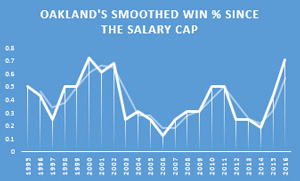 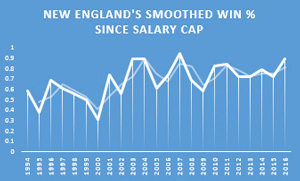 Analysing teams and their peaks and troughs

The Carolina Panthers have been a 0.5 team, on average, since the mid 90’s. Their low point was a single win season at the beginning of the century and a high of 15-1 in the 2015 regular season that turned into a 17-2 overall.

The smoothed curve for their seasonal win percentage indicates general peaks in the mid-1990’s, mid-2000’s and mid-2010’s, accompanied by less welcome troughs around the turn of each decade. Overall, the Panthers took around four seasons to fall from their peak to their trough, and the same period of time to recover to close to their previous highs.

Allowing the sides with the worst records in the previous season to have the earlier pick of the college talent via the draft, in theory, boosts the chances of those who struggled the season before.

The Denver Broncos have experienced three peaks and two relative troughs, beginning in the late 90’s with a similar eight years between peaks. Some sides run from peak to peak, via a trough slightly quicker than Carolina or Denver.

Chicago, Green Bay and Cleveland have had cycles that lasted just six seasons, while others, such as Baltimore have recently run to nine seasons. But overall, eight years appears to be the average boom to boom again cycle.

The short term indicators that indicate a side might be expected to show improvement or decline from one season to the next have been well explored.

These include a previous season buoyed by a largely unsustainable positive turnover differential, a skewed record in close matches or an over or under performance compared to their Pythagorean win expectation.

But alongside these factors, we may include where a team is in their growth or decline cycle due to maturing, high-quality draft selections from recent years or ageing players exiting their peak performance years, supported by lower quality recent draft selections.

Even though American Football is a team sport, the influence of outstanding individuals can transcend the more general trends.

A 16 game NFL season, with a skewed strength of schedule, it is short in length with a knockout stage in the post season that is ripe for upsets.

Indianapolis rode a Peyton Manning inspired peak for an impressive period from the beginning of the century, while Brady and Belichick have come closest to producing a dominant and sustained performance that is more typical of unrestricted leagues and New England rarely threatens to dip below the level required to secure post season participation.

But the majority of teams will be in various states of decline or rebuilding and these longer term trends deserve consideration when evaluating the upcoming NFL season.

Currently, the likes of Baltimore, Chicago, New Orleans, SF, San Diego and the New York Jets appear to be emerging from their draft inspired trough, while Arizona, Buffalo, Dallas, Detroit, Green Bay, Houston, Kansas City and Minnesota are around their baseline high points.

New England, for the time being at least, continue to defy convention and the draft related oscillations that influence the performance of others - Pinnacle already has low margin NFL odds posted for when they begin the defence of their Super Bowl title in the first week of September.