On July 28 Dillian Whyte will face Joseph Parker in an intriguing heavyweight clash at London’s O2 arena. Both fighters are within touching distance of a world heavyweight title shot and have just a sole defeat on their records. 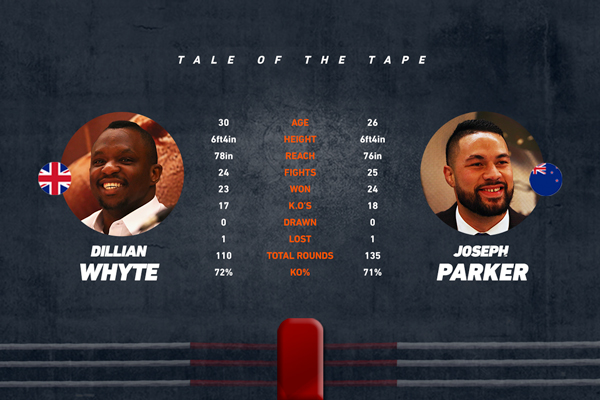 Whyte vs. Parker betting: How do both fighters win?

Dillian Whyte is a fiery personality, and because of this, if you can draw the Brixton fighter into a confrontation it can hamper his performance inside the ring. Parker is unlikely to go full throttle to goad Whyte into a fight but the 26-year-old will prepare in the gym of the recently retired David Haye – something Whyte has already reacted to on social media.

When provoked pre-fight, Whyte will often try and force a knockout rather than box systematically to a plan, something that was obvious in his 2015 loss to Anthony Joshua. In his most recent outing against Lucas “Big Daddy” Browne the 30-year-old demonstrated he is more than capable of boxing to a strategy and produced arguably the best performance of his career.

The key for Whyte is to not get over anxious and look to do too much too soon. Focus on defence, keep distance, use the jab methodically and take advantage of one key advantage that he holds – longer arms – keeping a disciplined pace throughout the whole twelve rounds.

Whyte, who goes by the nickname of “The Body Snatcher” doesn’t do anything great but he does a lot of things well. Against Browne he displayed a good jab, nice lateral movement and boxed to a plan – tactics he will need to adopt if he is to be victorious against the more resilient, resolute Parker.

Parker is fast, strong and can hold a good shot and has now mixed at top level in the heavyweight division.

The key to victory for the 26-year-old is to use his feet, utilise his movement and footwork to win him the fight. Whyte is the better of the two inside but Parker can nullify this by constantly moving to make Whyte have to reset – similar to the Robert Helenius fight.

Whyte likes to plant his feet and punch with full power so the utilisation of movement is imperative for Parker to punch in between Whyte’s shots and essentially avoid what Lucas Browne got wrong – standing right in front of Whyte. Parker holds advantages at midrange and he will need to capitalise on this to be victorious on British soil.

Can bettors get an insight from the Anthony Joshua fights?

Both Whyte and Parker have just one loss on their records, against current heavyweight world champion Anthony Joshua, with Whyte losing via seventh-round stoppage to his British enemy back in December 2015, while Parker’s reign as WBO world champion was ended with a point’s loss in March this year.

When analysing Whyte’s fight with Joshua, he was found to be lacking in physical and mental condition. But fast forward two and a half years and the 30-year-old seems a lot more emotionally mature, shrewder, whilst it is well acknowledged that he now trains more scientifically and should be more at ease on the big stage.

Against Parker, Joshua used his reach advantage to frequently connect whilst his jab to build a lead on the cards. Parker threw noticeably more power punches (176 to 113), but nonetheless had an inferior success rate, with just 29.5 per cent, compared to 40.7 per cent for Joshua.

The WBO champion admitted that he was too careful once the fight had concluded, but it was more the New Zealander’s punch correctness rather than volume that was detrimental to his overall performance.

Whyte vs Parker predictions: Will the fight go the distance?

Both fighters can stand toe-to-toe and come out on top against lesser opposition but when matched against each other it’s an unlikely tactic.

Parker has the sense of a distance fighter about him at world level, that boxer who just about does enough against the decent opponents but will always come up short against the elite of the division. He struggled at times against Andy Ruiz Jr and the thoughtful but likewise capable Hughie Fury. He’s good some nights; yet unappealing on others.

The Dillian Whyte we watched pre Lucas Browne most likely drops a decision to Parker. But, the Parker we observed pirouetting around against Hughie Fury and Andy Ruiz Jr, most likely loses to Dillian Whyte. It’s that sort of contest.

Parker is durable, and very elusive, rolls naturally with punches and has a rock-solid chin. Whyte has won seven in a row since his defeat to Joshua in 2015 and it’s highly likely the fight goes long despite the animosity and predictions in the buildup.

Whyte vs. Parker odds: What can bettors expect?

Whyte vs. Parker is a captivating fight. It’s attractive on all fronts for fight fans – boxer versus brawler, attacker vs. counterpuncher, the pair are still somewhat young, in heavyweight terms, and both are trying to step out of that nearly man bracket and prove they belong amongst the elite in the division.

Joseph Parker has vowed that he will “stand and trade” with Dillian Whyte but with so much on the line for both men, it would be somewhat surprising to see the pair stand toe-to-toe and slug it out recklessly.

What is more likely is a technical distance fight where both men show the other plenty of respect with the occasional high risk approach in a distance encounter. Home advantage for Whyte cannot be ignored and it wouldn’t be a major surprise to see a questionable decision, and even a controversial draw.

The betting markets have the fight priced just about right. The edge should sit with Parker and the odds reflect this. The kiwi has faster hands, feet, and punches more correctly, with more defensive responsibility. Whyte rivals Parker with his jab, and potentially edges the New Zealander in power-punching.

Anthony Joshua is scheduled to return to the ring on September 22, in a mandatory defense against the WBA's top rated contender, Alexander Povetkin. For Whyte, if he does beat Parker, it will make for an engrossing second shot at his domestic rival.

Victory for Parker, won’t have many clamoring for a rematch with Joshua, but it would put the Kiwi decisively back in the mix for a world title shot, which is enough to know both men will come in fully motivated for victory.