On August 26, two worlds will collide in Las Vegas when 49-0 boxer Floyd “Money” Mayweather meets number two pound-for-pound MMA fighter, Conor McGregor. Having analysed the fight from the point of view of a boxing expert, it's now time to see what an MMA expert thinks of the Mayweather vs. McGregor odds.

Want to win a signed Mayweather boxing glove, a signed McGregor UFC glove or the equivalent value in cash paid into your Pinnacle account?  Simply place a bet on any Mayweather vs. McGregor betting market at Pinnacle then email us your full name, Pinnacle account ID and your answer to the question above by clicking the image below (T&Cs apply). 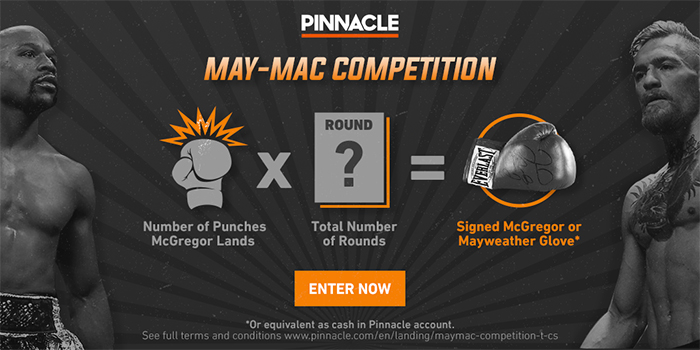 When it comes to fight promotion, it doesn’t get any better. Potentially the greatest boxer of all-time making one last return to the ring - this is already the second time Mayweather has made a comeback after retiring. The man trying to tarnish Mayweather’s immaculate 49-0 record is probably the best self-promoter in MMA history, Conor McGregor.

While the fight is being billed as an epic, many believe when the two step in the ring it will become a dull affair. A boxing expert’s opinion of the Mayweather vs. McGregor betting is that it’s greatest boxing craftsman of all-time pairing up against a guy with little to no boxing experience - a no brainer.

There is no way that McGregor deserves to be favourite, but this match-up is closer than the surface data suggests.

The Mayweather vs. McGregor odds suggest the bout is a foregone conclusion - Mayweather is currently priced at 1.155* giving him an 86.58% implied chance of victory (at the time of writing), which some say is actually being generous to McGregor.

Despite the general consensus being that Conor McGregor will likely embarrass himself when stepping into a professional boxing ring for the first time, there are some aspects of the much-anticipated fight that work in his favour.

The reality is that there are four good reasons to think McGregor has a better chance than he is currently being given. Of course, there is no way that McGregor deserves to be favourite, but this match-up is closer than the surface data suggests.

Floyd Mayweather is 40 years old. In most sports that’s past retirement age and in boxing it’s ancient. It’s been 21-years since Mayweather stepped in the ring for the first time and two years since he admitted that training is far more of a grind now than it once was.

Even excluding the potential for his falling off an age-related cliff, some amount of decline is inevitable. Whether or not that potential decline is enough for McGregor remains to be seen.

Is “Money” Mayweather all about the pay day?

We’re not going to say pressure is ever going to be a factor for Mayweather; he’s too experienced for that and he’s getting his money no matter what happens once he steps foot in the ring, but that’s the real point here.

If you need a big shot to land, having McGregor’s track record isn’t the worst place to start - 18 of his 21 wins have been by knockout.

Mayweather needs the money, thanks to his well-documented tax issues and that means he’ll push himself even if he’s not at 100% come fight night.

As much as his unblemished record means to him, the $300-$400 million he stands to make from this fight means more, so if Floyd finds himself hurting from training he might still be willing to fight. It might be a big if, but if Mayweather isn’t in peak condition McGregor will certainly notice and take advantage of it.

Mayweather vs. McGregor betting: Could size be key?

While the size difference isn’t massive, Mayweather is pretty used to fighting smaller men than McGregor. His last victim, Andre Berto, is just 5’6.5”; before that, it was 5’5” Manny Pacquiao and 5’7” Marcos Madaina (twice).

McGregor measures 5’9” (Floyd is 5’8”) and is rangy, with a massive 74” wingspan (Floyd’s is 72”). The size and reach, combined with the unorthodox fighting style McGregor will bring could be difficult for Mayweather to navigate.

While the sport we’re betting on here is boxing, Mayweather has made his bones against boxers; that’s one thing McGregor isn’t. While the Irishman has made a career out of hitting people, it’s through the use of Krav Maga techniques, which look awfully different to the Marquess de Queensberry standards Mayweather is accustomed to.

McGregor is going to come in with a different style, which combined with the unusual angles created by his height and length will create a different target to what Mayweather is accustomed to. If nothing else, unpredictability has to heighten McGregor’s chances of landing a knockout blow.

The size and reach, combined with the unorthodox fighting style McGregor will bring in could be difficult for Mayweather to navigate.

Former MMA fighter Mike Brown told ESPN’s Brett Okamoto: “McGregor is a big guy, maybe the biggest guy Mayweather has ever fought or close to it. He's a southpaw and doesn't move like a traditional boxer. So, the angles Mayweather is used to seeing are slightly off.

"All of those variables tip it a little to Conor's favour. Not like he's a favourite, but there are some things that make this a little different from a normal boxing fight. McGregor could never win a decision, obviously. The only way he can win is getting Mayweather with a shot that he doesn't see coming, hurting him and finishing him. You never know if that big shot could land."

Will we see evidence of McGregor’s knockout power?

If you need a big shot to land, having McGregor’s track record isn’t the worst place to start. Of his 21 wins, 18 have been by knockout and while other UFC stars have seen their style grow more cautious as money has started to roll in, there’s no question that the knockout is McGregor’s bread and butter. 13 of his knockouts have come in the first round, so look for McGregor to start the fight fast.

The importance of controlling aggression

In the lead-up to the fight, McGregor’s famous mouth has been working overtime and Mayweather’s taken everything Conor’s thrown at him. Indeed, Mayweather’s never been so rattled that he’s lost a fight, so why should this one be any different?

Firstly, McGregor has a history of flummoxing even the most stoic champions. When McGregor fought Jose Aldo, it was Aldo who was ranked as the top pound-for-pound MMA fighter in the world. McGregor’s pre-fight trash talking reached legendary status, which may be why Aldo rushed into the shocking punch that ended the fight just 13 seconds in.

McGregor is going to come in with a different style, which combined with the unusual angles created by his height and length will create a different target to what Mayweather is accustomed to.

Secondly, in all the talk thus far it’s been notable that McGregor hasn’t touched on Mayweather’s well-known history of physical abuse of women (given other topic matter, it’s certainly not out of a desire to spare Floyd’s dignity). Unless there’s some agreement in place to not go there, it’s entirely possible that McGregor could take a big shot at Mayweather just before they step in the ring.

Touching a nerve, especially if it’s just before the fight, could give Mayweather a more emotional stake in this fight; one could see that leading to an Aldo-style fall from grace. However, considering Mayweather has remained disciplined throughout his 21-year career, it’s not something many bettors will be basing their judgement on.

Will the fight live up to the hype? It’s hard to say, but it’s far from the foregone conclusion it’s being made out to be. This article has highlighted various reasons why McGregor might actually have a chance. Granted, the stars will have to align and it would all have to fall perfectly for the Irishman but stranger things have happened.