On Saturday September 16, boxing will witness a mouthwatering clash as Saul “Canelo” Alvarez (49-1-1, 34 KOs) will battle the unbeaten, hard-hitting Gennady “GGG” Golovkin (37-0-0, 35 KOs) in a middleweight contest at the T-Mobile Arena in Las Vegas. Is there value in the Canelo vs. Golovkin betting? Read on for some expert insight into the Canelo vs. Golovkin odds.

Tale of the tape

While Mayweather vs. McGregor was a clear sharp vs. square situation, this fight will certainly be different.

The fight has been earmarked over the past couple of years and will undoubtedly have bettors' opinions split almost straight down the middle. Both fighters are close to their respective primes and it is an intriguingly problematic fight to predict. Even individuals with expert understanding of how to bet on boxing would struggle to dissect a surefire winner.

Canelo, at 27, will hold the advantage of youth by eight years over the 35-year-old Golovkin, amassing 14 more fights and stacking up 181 additional rounds since turning professional - so is debatably also the more experienced boxer.

The red-headed Mexican first laced up professional gloves at just fifteen in Jalisco, Tonala, Mexico. A place where boys fight as men and often end up severely hurt. Alvarez lasted, having his first 12-round fight when he was merely a boy at 17, an age in most countries where he would be too young to turn professional.

Both fighters are close to their respective primes, even individuals with expert knowledge would struggle to pick the winner.

The Guadalajara-born fighter has since gone twelve rounds fifteen times as a professional – with his only loss coming at the hands of Floyd Mayweather. A 67% knock-out ratio illustrates that the fiery Mexican also carries power in both hands as well as all-round boxing ability.

Golovkin is distinguished for his hard-hitting style and vaunts one of the most imposing knock-out records in boxing - a conversion rate of 89% from 37 wins. The Kazakhstani fighter has shattered the vast majority of opponents that have stepped into the ring with him – and looked devastating in the process.

A vastly experienced and well-schooled amateur, the fighter known as "GGG" began boxing at age 11' accumulating 400 contests, culminating with an Olympic silver medal in Athens in 2004.

Now at age 35, Golovkin still remains one the most feared fighters in boxing without ever losing a professional fight or being knocked down. The tough man from Kazakhstan is merciless and vicious in pursuit of victory but still has his doubters – who he will be fully motivated to silence on September 16.

Canelo vs. Golovkin betting: How does Canelo win?

Canelo is a very good back-foot fighter. The only time the 27-year-old has really struggled is against cautious, defensive boxers in the Floyd Mayweather or Erislandy Lara mould – something Golovkin is not.

The Mexican possesses the quicker hands and superior defence on the inside and is greater at slipping and rolling shots than the champion – so will need to utilise and display all of these advantages if he wants to defeat the destructive come-forward style of Golovkin.

When a fighter has a reach advantage in boxing strapped alongside a power advantage, it tips the probability of the outcome in their favour.

Kell Brook and more recently Danny Jacobs both set a blueprint for how Golovkin can be tamed – but that was a reckless, ultra-aggressive Golovkin putting no real thought into his work.

Jacobs is the only fighter to last in a championship fight during Golovkin's supremacy in an era where 22 different boxers have at some point held a version of the middleweight crown, with only three of those champions sharing a ring with him; a statistic that demonstrates the quality and power the champion possesses.

If Golovkin attacks Canelo and pressures aggressively on the front foot in similar fashion as he did against Brook and Jacobs, without much thought into his work, in seek-and-destroy mode, the fight will play straight into the challenger's hands.

Will Golovkin repeat those tactics and did he lose an edge against Jacobs? Possibly but bettors should note that it was a close and competitive fight belying the 7.00 odds against Jacobs. The Brownsville, New York City fighter also represented an entirely diverse style to Canelo. Add to that a height, reach and weight advantage for Jacobs and it was always going to be an exceptionally tough night’s work for the champion.

Canelo vs. Golovkin betting: How does Golovkin win?

Golovkin, despite what critics have mooted, will be best served using his jab and boxing in a similar fashion to the David Lemieux display last year.

The champion possesses a superior jab to Canelo and can control the shorter man by keeping him honest and in place, employing his jab to maximum impact from the off.

The champion likes to close his opponents down, apply pressure and hit them with body shots. A tactic that can be successful against Canelo if orchestrated in the right manor - staying long range, setting himself up and bringing over his jackhammer right hand.

If Golovkin boxes, controls the distance, and counters with his jab he should still have enough, even at 35, to defeat Canelo.

Canelo is not a great pressure fighter; he prefers fighters who come to him so he can set traps, so stylistically GGG is made for Canelo. But Golovkin is a different kind of animal to anyone else in terms of being a pressure fighter.

Alvarez is one of the most gifted combination punchers in boxing and allowing him to take advantage of that would be extremely detrimental to Golovkin.

A well-orchestrated plan where Golovkin can keep the Mexican at distance and break his resolve systematically before applying more significant pressure will almost certainly allow the champion the best chance of victory.

Canelo vs. Golovkin odds: What can bettors expect?

If the fight had happened three years ago when fans originally demanded it, Golovkin would have been too strong for Canelo.

Now, both the odds and probable outcome have significantly narrowed. Despite the high knockout percentages shared between the pair, it is highly probable the fight will be a distance fight with neither boxer wanting to wilt under the other's barrage.

If Golovkin boxes, controls the distance, and counters with his jab he should still have enough, even at 35, to defeat Canelo. A three-inch reach advantage and a one-inch benefit in height pull together reason for the Golovkin edge; the middleweight champion can be victorious providing he exploits that.

When a fighter has a reach advantage in boxing strapped alongside a power advantage, providing that fighter understands how to use the reach benefit, it tips the probability of the outcome in their favour.

Reading about how important knowledge of pre-fight preparations can be in a boxing betting strategy will certainly help bettors when analysing the Canelo vs. Golovkin odds.

Nonetheless, the fight represents excellence on all fronts, two fighters at the summit of their careers and the paramount fight in boxing - Saturday night in Vegas will be special.

Want to learn more about boxing before the big fight? Follow these 10 Twitter accounts to improve your boxing knowledge. Meanwhile, the current Pinnacle Betshare shows who bettors are siding with so far: 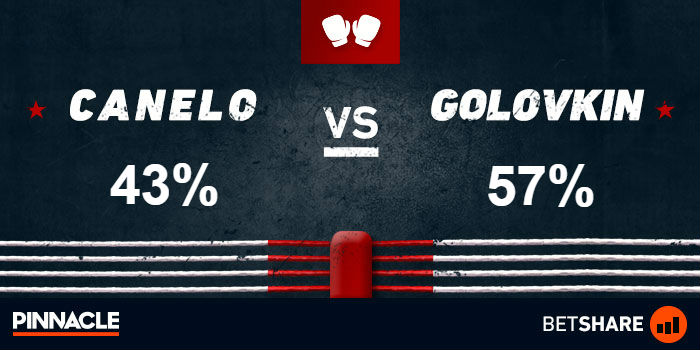