Current heavyweight sensation Anthony Joshua's next fight will come against New Zealander Joseph Parker on March 31st at the Principality Stadium in Cardiff, Wales. The winner has the chance to claim three of the four major heavyweight titles, inserting themselves just one fight away from unifying the division. Is there value in the Joshua vs. Parker betting? Read on for some expert insight into the Joshua vs. Parker odds.

Joshua vs. Parker: Tale of the Tape 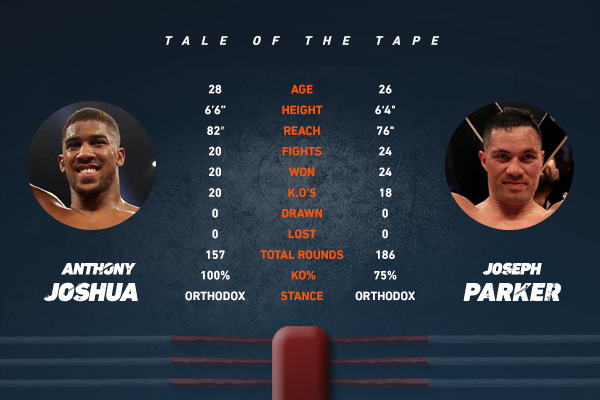 Joshua vs. Parker betting: How does Joshua win?

Joshua possesses the physical edge with a two-inch height advantage and a vast six inches extra in reach, something that will make it difficult for Parker to be the aggressor but also an area that may suit his tactics as a result.

Can you beat The Pinnacle Sports Line?

For Joshua to be successful he will need to utilise his physical attributes, height, reach and power. Parker struggled to get inside against the taller man when he fought Hughie Fury in his last bout and the Brit will need to make Parker pay when coming in boxing in a similar manner to his display against American contender Dominic Breazeale.

When looking at the fight over the distance, Parker’s speed will likely slow as the fight progresses, and Joshua has already demonstrated in his career that he can carry his power into the later rounds, meaning whilst not as fan friendly, a slower systematic fight should favour Joshua, allowing the 28-year-old more opportunities to catch Parker coming in at a pace that suits the Brit.

If Joshua moves, uses his reach and his power, not leaping in then the champion will make things a lot easier for himself. He possesses natural skill, has size and carries a lot of power, which can be chilling at times. His punches are crisp and fluid and he will need to make use of these advantages whilst being calculated in his approach to be effective against the WBO champion.

Joshua vs. Parker: The statistics

*All statistics provided by CompuBox

How does Parker win?

Parker will be familiar to British shores after defending his WBO belt for the second time in his last bout, outpointing the game but inexperienced Hughie Fury to take his record to 24-0. The 26-year-old has been champion since 2016 after defeating the undefeated Mexican American prospect Andy Ruiz in Auckland – a feat that meant Parker became New Zealand’s first ever heavyweight world champion.

Now, in his 25th professional bout, Parker and his team believe they have the beating of one of boxing’s hottest property’s, trusting that Joshua's chin is not as solid as many might believe, highlighting the champions vulnerabilities shown against an ageing Wladimir Klitschko and six years prior when Mihai Nistor, a little known Romanian fighter stopped the Brit in the third round at the European Amateur Championships in Turkey.

Parker has boxed almost double the number of rounds that Joshua has in his professional career and this will stand the New Zealander in good stead. If he can drag Joshua into the second half of the fight and make him work tirelessly in the championship rounds the contest could favour the WBO champion.

Parker has been given little chance in the betting odds. But the challenger is a genuine compact and forceful fighter. A win over Andy Ruiz for the vacant WBO title alongside victories over Carlos Takam, Alexander Dimitrenko, and Hughie Fury prove that Parker can potentially be a threat to the Brit and certainly isn’t a fighter that will go down without a fight – over 8.5 rounds is currently priced at 2.450.*

The Kiwi heavyweight's unbeaten career has provided increasingly tough tests up the ranks all the way to the decisive examination on March 31st, Parker has the fastest hands of anyone that Joshua has boxed, and has also shown he has a chin – possibly a granite one.

These attributes alone will teach us more about how good Joshua is over the distance when needing to box his way into a fight, and not simply overpower his opponent with raw power and aggression.

Can bettors get insight from Carlos Takam?>

Both fighters have a previous foe to compare stats in Carlos Takam. Joshua faced the game and strong Takam in his last bout with the French-based fighter being a late stand-in opponent following Kubrat Pulev pulling out of the fight due to injury, while Parker outpointed the 37-year-old in a final IBF eliminator in 2016.

Joshua’s jab overshadowed Parker in every round accumulating a total success of 26.9% compared to 9.2% of Parker.

When analysing the stats Joshua’s joy when using the jab overshadowed Parker in every round accumulating a total success of 26.9% compared to 9.2% of Parker.

Overall, both Joshua and Parker averaged the same amount of jabs thrown per round (22.7) but it was the Brits greater accuracy and speed of shot that set-up the KO with 46.7% landing during the 10th round.

Joshua owned a 33.5% success rate in punches compared to 23.8% from Parker – a stat that highlights Joshua’s impressive speed of punch.

Looking back on both fighters’ performances with Carlos Takam, it should highlight to bettors that this fight is a real test for the two-time world champion – perhaps his most dangerous so far.

Parker dealt with Takam fairly convincingly but didn't stop him.Takam had a full camp, whereas the challenger was only given three weeks’ notice against Joshua who did struggle with the awkward style of Takam for large parts further highlighting the potential for a distance fight.

Joshua vs. Parker odds: What can bettors expect?

Despite the talk of an early knockout occurring in this fight in favour of Joshua bettors should expect a fight that ventures long.

Joseph Parker has so far shown no signs of vulnerability in his career – something that cannot be said of Joshua. Whilst he does not hold as concussive power as the former Olympic gold medalist in high calibre fights the New Zealander does possess sound boxing skills, durability, and should know enough to avoid any early onslaughts from the Brit.

The WBO champion possesses some of the fastest hands for a big fighter in the heavyweight division angling that Joshua will come into the fight far lighter than he did against Carlos Takam to narrow the speed gap between the pair.

One issue that Parker will be presented with is that the 26-year-old stands very straight and upright which could play into Joshua’s hands. If bettors look to the Kiwi’s previous fight against Hughie Fury there is nothing to suggest Parker is superior to Joshua but his stand out attributes and toughness provide the sternest fight available for the champion right now.

Joshua will always be the favourite whoever he fights and his previous form makes the odds understandable, but this is a real, good test for the WBA and IBF champion, and should go far longer than expected in the betting odds.