The Kelly Criterion has come to be accepted as one of the most useful staking methods for sharp bettors. While most of us think we have an understanding of the Kelly Criterion and how it works, this is merely a simplified version of the formula. Our latest Guest Contributor has provided an in-depth explanation of the “real” Kelly Criterion. Read on to learn more.

Using the examples below, we can examine the potential flaws in using a simplified Kelly Criterion formula.

Example #1 - A soccer game where both a visitor win and draw outcome provide the bettor with an edge:

The Kelly formula would suggest staking 2.5% of bankroll on both the visitor win and the draw, staking a total of 5% of bankroll. Looking at the Handicap odds for the same soccer game changes how we might view the use of the Kelly Criterion.

Example #1A - The same soccer game in example 1 re-stated as a Handicap line:

A bet on the visitor +0.5 at odds of 2.50 is the equivalent to betting half the amount on both the visitor win and draw (both at odds of 5.00). So why does the Kelly formula give a different answer?

The answer is that the formula commonly known as the Kelly Criterion is not the real Kelly Criterion - it is a simplified form that works when there is only one bet at a time.

How to use the “real” or generalised Kelly Criterion

Below is an explanation of how to apply the generalised Kelly Criterion to betting:

Step - 1: List all possible outcomes for the entire set of bets.

Step - 2: Calculate the probability of each outcome.

Step - 3: For each possible outcome, calculate the ending bankroll for that outcome (starting bankroll plus all wins minus all losses). Leave the bet amounts as variables.

Step - 4: Take the logarithm of each ending bankroll from step 3.

Step - 5: Calculate the weighted average of the logarithms from step 4, weighted by the probabilities from step 2. Call this the “objective”.

Step - 6: Find the set of bets that maximises the objective from step 5. These are the optimal bets according to the Kelly Criterion.

In order to find the set of bets that maximises the objective, simply use Microsoft Excel’s built-in “solver” module (see below) - this takes care of the complexities of advanced calculus and eliminates a tedious trial-and-error approach. 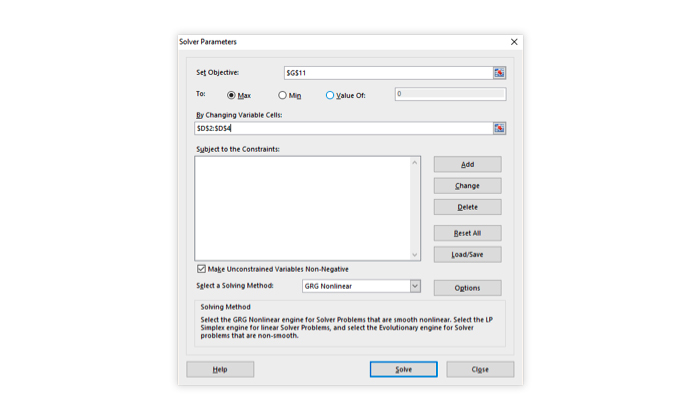 The result from using these six steps is as follows:

Note that this is identical to the result in Example #1A, where the simplified version of the Kelly Criterion does work. By making two mutually exclusive bets on the same game, the two bets act as a partial hedge for each other – reducing the overall level of risk, which Kelly rewards by increasing the bet amount (compared to the calculation in Example #1).

We have already seen how this generalised Kelly Criterion can produce completely different results than the simplified Kelly formula that most bettors will use when there are multiple edges in the same game.

There are, of course, occasions when you might have multiple edges on different games, all taking place at the same time. The example below is one such situation:

Example #2 - Betting with an edge on four separate games that are all taking place at the same time.

Now while each of these bets make sense individually, using the simplified Kelly Criterion would result in staking 110% of bankroll - something that clearly doesn’t make sense. However, by applying the six steps stated above, we can see how the generalised Kelly Criterion produces a different set of results. 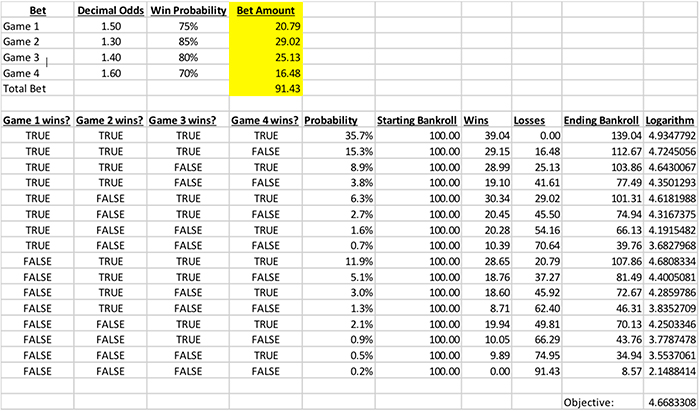 In additional to calculating the optimal staking amount for a bet with multiple edges, the generalised Kelly Criterion can also be used when bettors have a viable hedging opportunity.

Using the 2015 Wimbledon tournament example previously used in this hedging article, we can see how the generalised Kelly Criterion should be applied to a hedging opportunity.

If you had €1,000 starting bankroll, and you bet €10 on Muguruza at 41.00 to win Wimbledon 2015 outright, you would have to decide how much to hedge on Williams at 1.85 in the final. Let’s assume that the odds in the final are efficient, that is, they accurately reflect each outcome’s probability so that there is no edge on either side.

The more commonly used simplified Kelly formula would provide the following results in the scenario:

However, applying the generalised Kelly procedure as stated above yields the results below:

Taking the exponential of the objective gives an interesting number, called the “certainty equivalent”. In Example #3 above, the certainty equivalent is exp(7.072341) = 1,178.90. This means that, from a Kelly Criterion perspective, the bettor would be indifferent between having the listed set of bets and having €1,178.90 in risk-free cash.

If we remove the hedge bet, we are left with the following:

So, the effect of the hedge bet is to raise the certainty equivalent from €1,166.87 to €1,178.90. So even though the hedge bet itself has a negative expected value, the resulting reduction in risk is so beneficial that from a Kelly perspective, it has created added value that’s equivalent to €12.03 in cash.

Some other applications of Generalised Kelly

Use the real Kelly Criterion to empower your betting - get the lowest margins and highest limits online at Pinnacle.