How do you know how much a bet is worth after you’ve made it? Understanding the Cost of Variance can lead to you becoming a more profitable bettor in the long term. Read on to find out more.

Recently, I defined a useful quantity for serious bettors called the “Swap Equivalent” to help you figure that out. The purpose of it is to calculate the relationship between the Expected Value (EV) of your risky positions and the corresponding Certainty Equivalents (CE). Multiply the EV of your position by the Swap Equivalent and you get the Certainty Equivalent (i.e., the amount of cash in your pocket you should be indifferent to having instead of your open bet). But, beyond that important conversion, you can use it to calculate the Cost of Variance.

For most people, the idea of variance is murky and mysterious, but for sharp sports bettors, it represents the inevitable ups and downs in your profits on the way to the pot of gold at the end of the long run. Thing is, it’s not just an annoyance that must be endured to realise your theoretical return on investment (ROI), it actually has a cost. How can that be? Because if it didn’t, then your Certainty Equivalent for any existing bet would be the same as its Expected Value at the present time. And I’ve written several previous articles explaining that they’re not the same.

We can define the actual cost of your variance (CoV) as the difference between your EV and your CE, and even though it’s typically a tiny per cent of your bankroll for individual bets, over the long run it can add up to a lot of profit. Let’s use equations to represent the Swap Equivalent. We can say that both of these are true:

We can combine them to see that the true Cost of Variance is your EV times (1 – the Swap Equivalent):

For example, say sportsbook XYZ has a line on today’s Diamondbacks-Rockies baseball game of D’backs +130/Rockies -150 (or D’backs 2.30/Rockies 1.60 in decimal odds). Based on the lines at Pinnacle, you estimate the Rockies have exactly a 60% chance to win. Theoretically, you could bet on the Rockies at sportsbook XYZ and have a net EV of 0 (i.e., the Expected Value of your bet is exactly the same as the value of the money that you bet). In fact, you might think that after making this same neutral EV bet over and over that things will eventually even out, and that’s just as good as keeping the money in your pocket.

But these numbers don’t paint the whole picture. They only tell us what’s going on along one dimension of your betting canvas: the value dimension. There’s a whole other dimension that affects the outcome for us: risk. If you bet anything at all on the Rockies, regardless of your EV, you put money at risk and you will incur some variance to win it back. What does the variance cost you? Well, let’s see.

But what’s the Swap Equivalent for your ticket once you’ve made the bet? We can calculate it like so:

w = payout of your bet as a percentage of your bankroll

A slippery slope for your bankroll

That may seem like a trivial amount, but if you were to make this bet over and over, you would cost yourself a little bit in theoretical growth each time and most likely eventually go bust. In fact, in a simulation of making this bet 10,000 times, the bankroll went bust 81.6% of the time (a plot of five typical simulation runs is shown below). 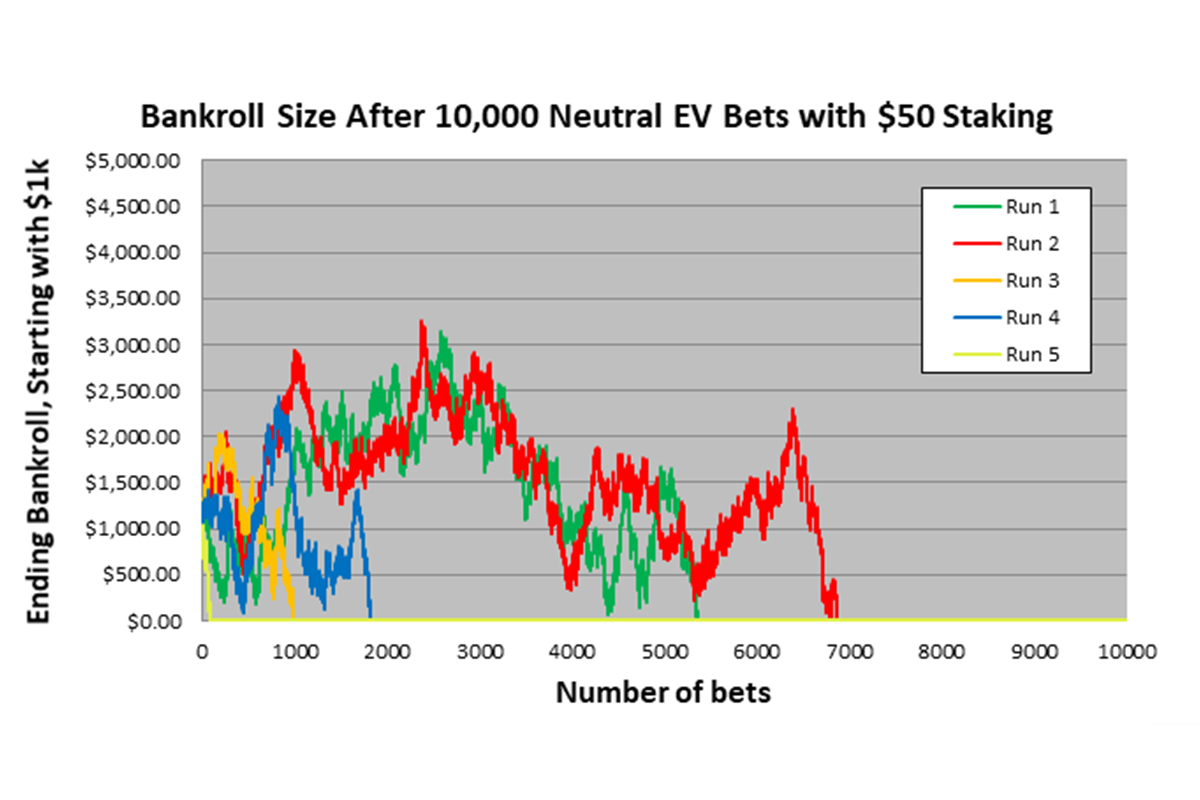 To think about it more intuitively, figure out what your bankroll would be in the case where you win vs. the case where you lose. If you win, your bankroll will be $1033, so the next time you bet $50 it only represents 4.8% of your roll. On the other hand, if you lose then your bankroll will be only $950, and your next bet of $50 will represent 5.3% of that. So, you end up betting a smaller fraction of your bankroll next time whenever you win and a larger fraction whenever you lose – with that small difference eventually snowballing into huge chunks of your remaining roll when you go on a downswing. This is not a formula for making a fortune, or even for breaking even.

Since you never bet 100% of your bankroll, you can never go broke, right? That’s a good theory, to be sure. But does it hold water?

You may believe you can fix that problem by staking proportionally – by betting 5% of your current bankroll instead of $50 each time,  you’ll bet more when you win and less when you lose, and then it will all even out. Plus, since you never bet 100% of your bankroll, you can never go broke, right? That’s a good theory, to be sure. But does it hold water? Let’s talk about going “broke” first. While it’s true that you technically can never lose your whole bankroll with proportional staking, how would you feel if you were down to your last $10? It would probably feel a lot like you were broke. So let’s run another simulation where you bet 5% of your bankroll under the same terms as before, except that if you dip below $10 you’re considered broke. How does this simulation turn out?

Even worse. Because you’re betting so much more after you go on an upswing, your later downswings are much steeper, even if you start by getting lucky (which is probably the only way you don’t go broke after 10,000 bets). This way, you typically see a result similar to that shown in the chart below (with the Y-axis shown on a log scale for clarity), and go broke more than 88% of the time: 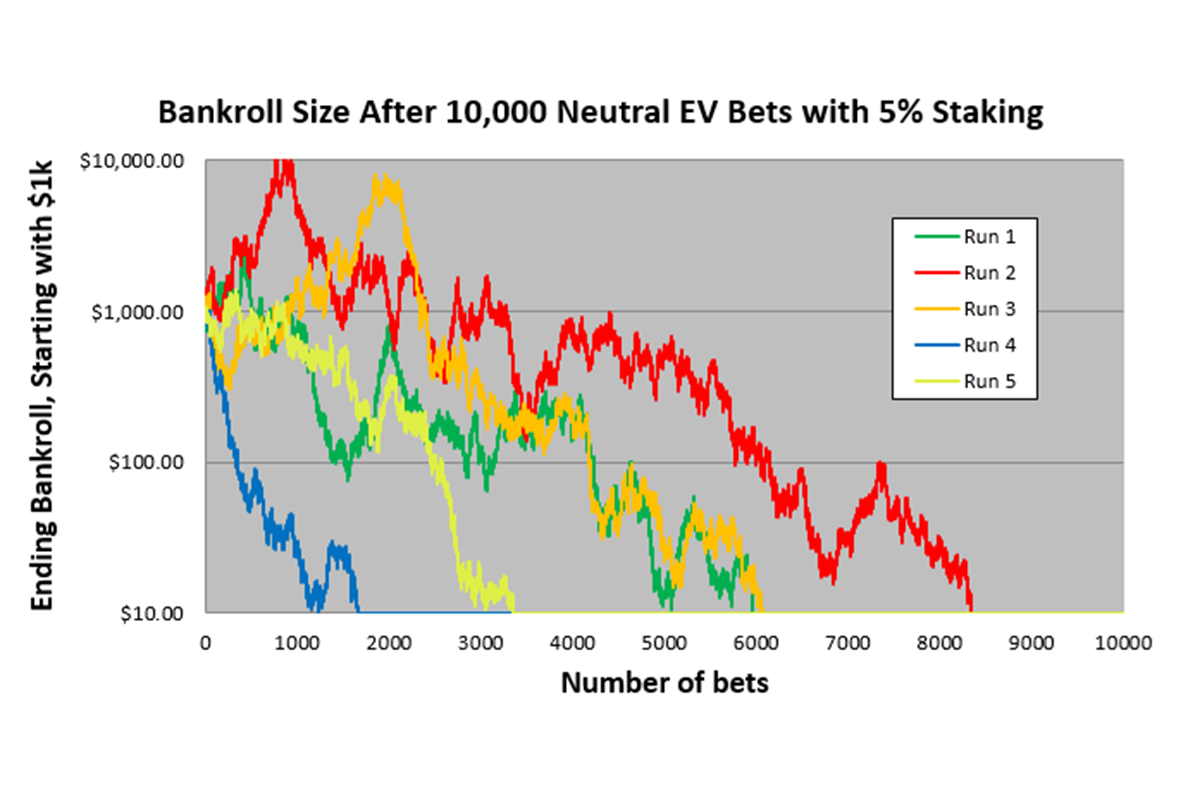 It shouldn’t be much of a surprise. Given a bet percentage that big, and with no edge, your Expected Growth (EG) for making that bet once is -0.083%. That may not sound like a lot, but after 5,600 bets, you would expect to see your $1k bankroll whittled down to below $10 on average. If you do a calculation of your expected ROI for the same odds, but with a 3.3% edge, you’ll find that your full Kelly fraction is 5% for betting on the Rockies and your EG is +0.083%. That's exactly equal and opposite to the -EG you get in my example, which means that you should be just as sad to make the neutral EV bet as you would be happy to make a bet with a 3.3% edge there.

Now, this isn’t to say that betting on neutral EV lines is the worst mistake you can make, or that it’s as bad as randomly betting on a market with a 4% margin or more. But, when you don’t have an infinite bankroll, you shouldn’t bank on your results evening out to equal your mathematical EV. Your focus should be on only putting as much of it at risk as the theoretical rewards merit.

If, instead of an average punter, you were Jeff Bezos and had a bankroll of $100 Billion, then the Swap Equivalent for your ticket would be essentially 100%, so there would be no economic cost for your gamble. Your Swap Equivalent and Cost of Variance equations would look like this:

Once you understand that variance has a real cost, it’s easier to understand why you shouldn’t simply make your focus all about finding +EV bets and ignoring -EV or neutral ones. The risk of the variance is costing you money, like a fee or commission when trading stocks, so you can get a real benefit by reducing risk. Sometimes that means betting less, to begin with, but even if you stake bets correctly (at the optimal size or less) there are many situations where the EV of your bet changes and outpaces the certainty equivalent by a noticeable amount.

In these spots, hedging your risk (by betting the other side at a low-margin bookmaker like Pinnacle, or trading out of some or all of your position on an exchange) acts as an insurance policy. And, if the cost of that policy is less than the cost of your variance, then buying it is the more profitable play.

Get the best odds online with Pinnacle across all major sporting events.

This article was authored by Dan Abrams. 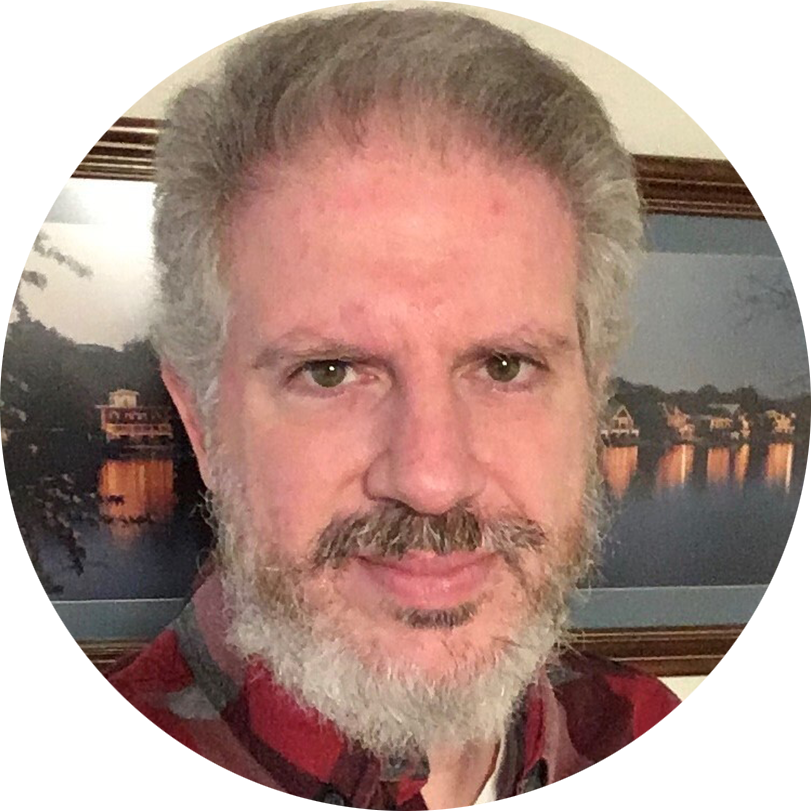 Dan is a professional engineer and part-time sports betting analyst. He has written articles on hedging and bankroll management for the TwoPlusTwo online magazine as well as the Trademate sports blog. He also manages the website https://playingnottolose.com which looks at ways that bettors can use risk management to potentially grow their bankroll quickly.