http://www.pinnacle.com/en/betting-articles/Betting-Strategy/pinnacle-sports-betshare-tweets/BZF27NBSF69U2DPE
Recently, the official Pinnacle Twitter account has been sharing data on the percentage of bets made on either side of selected major markets. Understand the benefits to our Twitter followers and how to use the information.

Working with the belief that the more educated a bettor is, the more likely they are to bet with Pinnacle, we are constantly looking for ways to educate in new and enlightening ways. We’ve always looked at Twitter as an opportunity to expand on that philosophy and we’ve done so with our BetShare tweets: 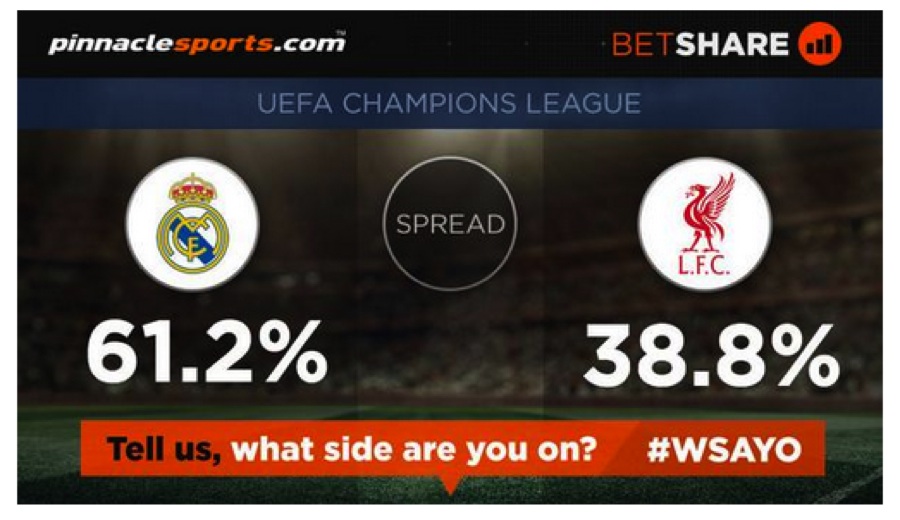 In these tweets, we’re letting bettors know what percentage of bets have fallen on each side of the market. You’ll know there’s value in if you understand the wisdom of the crowd.

Wisdom of the Crowd

When faced with uncertainty prior to making a bet, it can be helpful to trust the wisdom of the crowd.  Ultimately, the idea is that the larger the sample of opinions is, the less likely the mass opinion is to be wrong. Inaccurate outlier voices drown one another out, leaving a popular consensus.

When the crowd in question is the Pinnacle market, the Crowd’s voice becomes even more accurate. Because of our educational mandate and the savvy nature of a group of bettors who have chosen superior margins over the bells and whistles offered by other sportsbooks, our customers are the sharpest in the industry. Their mass voice can offer guidance. Thus, if 80% of the market likes one side of a two-way market, you could do worse than to follow their lead.

Of course, there are exceptions to that rule.

If you’re looking to out-do our sharp crowd, one-way is to look for patterns by combining data sources. While the percentage of bets is a good base on its own, it can become an even more powerful indicator when combined with other information. It’s said knowledge is power; data is too and the knowledge to wield that data can be enormously profitable. This all became abundantly clear when we saw a remarkable pattern emerge in the recent MLB playoff games played by the Kansas City Royals.

According to the market, Kansas City were underdogs throughout the MLB playoffs, so much so that we had three games where the betting was remarkably skewed against them.

So remarkably, in fact, that we immediately verified the numbers with an alternate source and then looked at movement to make sure the numbers were right. What we found was what should have been a eureka moment for the enlightened bettor. You’ll begin to understand why by reviewing this chart (Data is for Kansas City Royals only):

Three times, the percentage of bets on KC was in single digits - In the months we had been running BetShares, we hadn’t seen in any major markets -and in those three games, the lines barely moved against the Royals, if at all.

Money moves our markets, so if the market hasn’t moved, the amount of money on each side should be fairly even. In a case where only 5% of bets are on one side and 95% on the other, the total amounts wagered on either side are very likely similar, in which case the average bet on the 5% side is nothing short of massive. It’s well-known that one habit of sharp (big) bettors is to fade the public; when you recognize that Pinnacle offered the best price in the market on the Royals’ opponents in all three games, you understand why the public was betting against Kansas City, and what those sharps saw to keep the market in check.

We asked our lead MLB trader how much the line would move if all those bets were of the same size. He estimated it would represent a probability shift of 30-40%, so 60-80 cents. Those bets on the Royals were likely very, very big.

In short, the combination of those BetShares and market movement give us strong information about who’s betting where and why; where are the sharps? Where are the ? Where is the public? Where is the big money? You have free information on which to base your answers and can use it to make an educated bet even if you don’t know the game well.

This isn’t to say that you should always fade the public, but it’s information and it can clearly offer tremendous value. We’re interested to see how you’ll use it.

So, how can you get bet % information? All you have to do is follow @PinnacleSports on Twitter.

For now, Twitter is the only place we are sharing this information. When we do, pool your knowledge with your fellow tweeters (at #WSAYO) to figure out your best plays. That’s real value you’ll gain following and an edge on the market that we’re happy to provide to some very engaged customers. What’s in it for us? Word of mouth and branding. We hope you’ll agree that it’s a good trade for both sides.