In a previous article, we explained why bettors should not solely rely on the average, given its tendency to be influenced by outliers, and its inability to show the dispersion within a set of numbers.

Dispersion can be measured in many ways, one of which is the standard deviation - a quantity expressing by how much the value of a group differ from the mean value for the group. Different metrics are either used directly or are input parameters for a function or distribution.

For example, bettors are known to use a Poisson distribution model to predict the number of goals scored per team in a soccer game. However, this distribution has just one input parameter - the average - and is a discrete distribution - produces outputs as whole numbers.

A Poisson distribution model can estimate directly the likelihood of scoring one goal, rather than the probability of a goal occurring between the 25th and 30th minute (although it can be extended to derive these).

Normal distribution - the bell or Gaussian distribution – is also popular. This is a different model to Poisson for a number of reasons but also because it's a continuous distribution, based on two parameters: the average and standard deviation.

Lets look at the data from the 2013/14 Premier League season:

A number of conclusions can be taken from the data. Primarily the most popular goal difference is a draw, and the distribution is close to symmetric, with a favour towards home wins. However, our focus for the article is the standard deviation.

In order to estimate a home win by a goal difference of 1, 1 can be moved from a discrete (whole) value of 1, to represent the continuous range between 0.5 and 1.5. For each value we can then calculate its difference from the mean in terms of standard deviations. 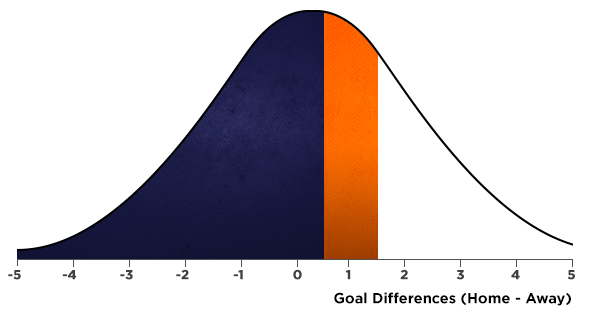 The great thing about this is that we can now remodel the normal distribution as shown. In this case we’d need to find the area of the region shaded in orange.

The area shaded in blue, showing the probability of less than 1 goal (or its continuous equivalent being less than 0.5 goals) can be found to be 52.15%.

Consequently out of 380 matches, we would have estimated 74.22 games ending with the home team winning with just one goal difference. In reality there were 75 games, so this was very close.

The table below shows that the discrepancy is minimal and the normal distribution appears to be a good fit - (there are ways to test for normality and this distribution fits nicely for 2013/14 EPL data). 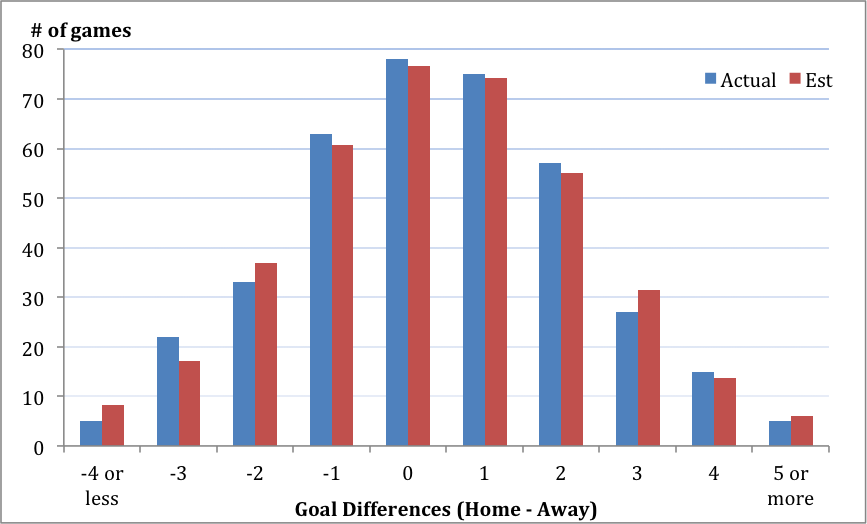 Let's now assume the distribution is correct for the current Premier League season. So as a spread bettor you may want to know what the probability of a home team winning by one or more goals is in the Premier League? This is therefore equivalent to the 1 - 52.52%, which is 47.48%.

In conclusion, the standard deviation is not just a measure of spread, whereby a higher value displays more dispersion within a group; it's also an important parameter to measure probabilities, something very helpful for sports bettors. In a future article we will focus on how a different standard deviation can affect probabilities and spreads.