To be profitable in the betting markets, a bettor needs two things: an edge over the bookmaker and a well-disciplined staking method. In this article, Joseph Buchdahl calculates the profitability and chances of bankruptcy for five different staking methods. Read on to find out which staking method is best for you based on your betting profile.

In October 2016, Pinnacle published the article Staking: One method to improve your betting, in an attempt to demonstrate that the amount you bet is actually more important than what you bet on. Of course, without positive expected value, no money management system in the world can turn a losing system into a winning one. Nevertheless, some methods of are inherently riskier than others, and it pays to be able to tell them apart.

The original article looked at all-in, fixed wager, Martingale, Fibonacci and proportional methodologies by seeing how they performed over an imaginary series of 500 binary (odds of 2.00) where the starts with a bankroll of $1,000, risks $100 for the initial wager (except for ‘all-in’ where it’s $1,000) which then varies thereafter according to the staking method, and holds 10% expected value – that is to say he wins 55% of the time.

In this article, I will compare the same staking plans over the same series of bets. This time, however, I will use the Monte Carlo method to repeat the simulation 10,000 times to estimate the actual risk probabilities that the could benefit from – the risk of going broke and the probability of making a profit.

The table below summarises the average, median and maximum betting bankrolls achieved for each staking plan after 10,000 runs of 500 simulated binary bets, along with the implied probabilities of going bust and of making a profit based on those runs. If at any point during a series of 500 wagers the bankroll was lost, that series came to an end.

Unsurprisingly, all-in consistently leads to disaster. The probability of winning 500 consecutive binary wagers (each with 55% probability of success) is 1.518 x 10-130. If you could repeat a series of 500 wagers every second, you would still not have nearly enough time to achieve a winning series before the death of the universe, expected in approximately 10100 (a googol) years. Good luck trying. In my 10,000 runs, the best winning sequence achieved before going bust was 17.

The obvious advantage of proportional staking over fixed is that in theory, you can never go bust.

Most bettors, of course, don’t do silly things like risk all of their bankroll on a single wager. Many, however, do seek to recover past losses by increasing stakes for successes wagers. Both Martingale and Fibonacci are what are termed as progressive staking plans. For binary bets, the Martingale doubles stakes after each consecutive loss, resetting the stake back to the initial stake after a win.

Clearly, a few consecutive losses can lead to some frighteningly large stakes which put the bankroll at considerable risk. Not as extreme as Martingale, the Fibonacci progression increases stakes after losses by following the Fibonacci number sequence where the next number in the sequence is the sum of the two previous numbers (1, 1, 2, 3, 5, 8, 13, 21...). After a win, the stake moves back two numbers in the sequence. Hence, each win recovers the two previous losses.

Sadly, neither staking plan offers the a safe betting experience. Nearly three-quarters of the time, a following Martingale can expect to be out of the game before 500 wagers have been placed. For Fibonacci, that probability is still over half. Granted, average (expected) returns are superior to fixed wagering, where the bettor bets the same stake ($100) every time, but do you really want to take such a risk in the hope of securing them?

Looking at the data above, your most typical closing bankroll will be zero (as shown by the median). Additionally, we haven’t even considered the possibility that in progressively increasing your stakes to recover losses, you might be faced with having to place one which is beyond the bookmaker’s permitted limits.

The advantages of fixed and proportional wagering

Evidently, the best two strategies are fixed and proportional wagering. Proportional wagering involves betting the same stake as a percentage (in this case 10%) of your current bankroll at the time you place it. Hence, if your first bet of $100 wins, your next stake would be 10% of $1,100 or $110. Alternatively, if it loses, your second stake would be $90. And so on.

Both fixed and proportional wagering have a very good chance (87%) of delivering a profit after 500 wagers in this scenario. The obvious advantage of proportional over fixed is that in theory, you can never go bust, although in the real world poor runs could lead to very small stakes indeed. Furthermore, your expected final bankroll is considerably larger, primarily on account of the fact that you will typically be large volumes compared to fixed stakes.

There is, however, a considerable skew to the distribution of possible bankrolls, with large values contributing a much greater weight to the average. Whilst that average is well over $100,000 (and indeed one run witnessed a final bankroll of over $37 million), the median (or typical) bankroll is just over $12,000. In fact, the distribution of possible bankrolls following proportional staking is approximately log-normal, in contrast to fixed staking where (discounting the zero bankrolls*) it is normal, with the average and median much closer together. 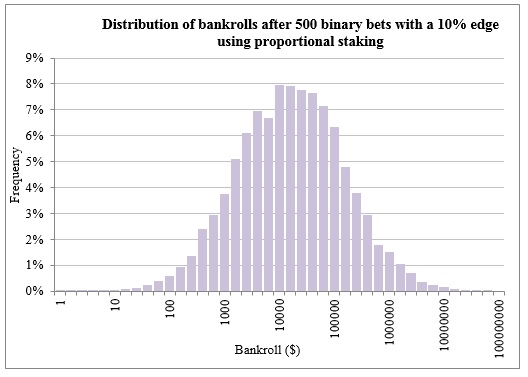 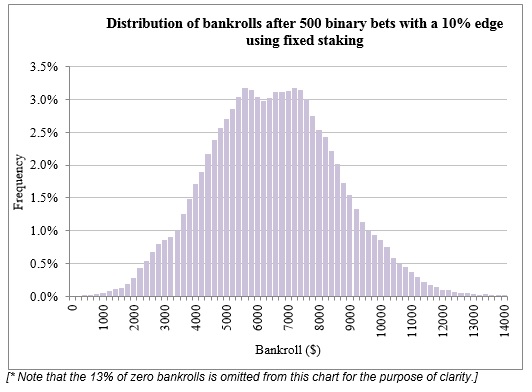 What are the chances of going bust based on your staking method?

An expected value of 10% from binary betting is, however, incredibly unlikely over the long term. Some of the most successful handicappers in the business will not deliver such profitability. Perhaps we ought to investigate how each staking strategy will perform for smaller advantages. The charts below plot the probabilities of going bust and making a profit for 6 levels of expected value: 8%, 6%, 4%, 2%, 0% (break even) and -2% (roughly the size of Pinnacle’s margin). 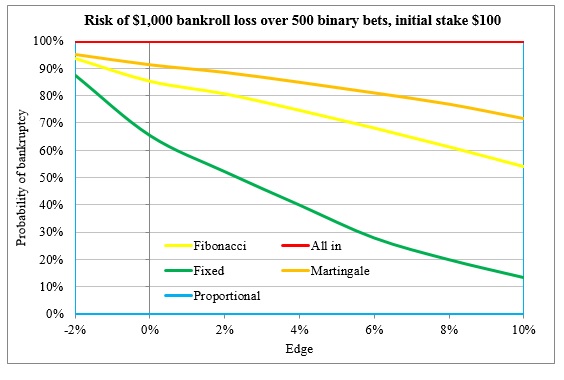 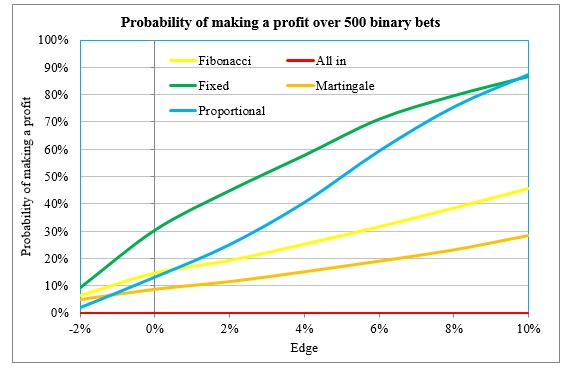 None of the data displayed here should come as too much of a surprise. Progressive staking is always the riskiest, but fixed fares little better once you no longer hold an advantage over the bookmaker. What might be less intuitive is the observation that for smaller edges, fixed staking actually offers you a better chance than proportional of finishing a series of 500 binary wagers in profit. Why is this so?

The reason is because when bankrolls lose capital they take longer to recover by means of proportional compared to fixed stakes. Essentially, this is the trade off for following a strategy that should never see you lose everything.

Proportional staking may be potentially more profitable and theoretically safer than fixed over the longer term, but it is less likely to show you a profit in the short term; especially when your advantage is small. In other words, when it wins, it wins bigger, but when it loses, it takes longer to recover. This can be confirmed by comparing the median final bankrolls for the two strategies.

Whilst progressive staking strategies are inherently very risky, even a 13% risk of going bust will not be tolerated by some bettors who prefer fixed staking. How do the risks change for each strategy if we reduce the size of the stakes? The next charts plot the probability of bankruptcy and making a profit for a range of additional initial stake sizes (8%, 6%, 4% and 2%) where the bettor holds a 10% advantage. 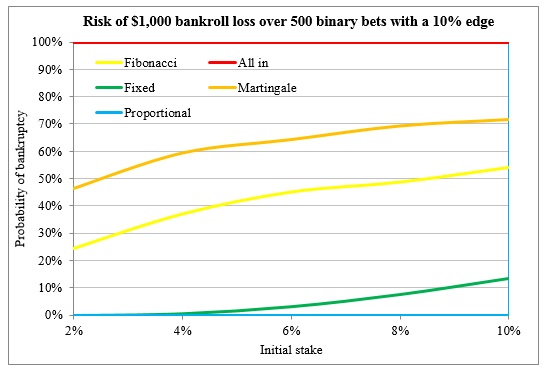 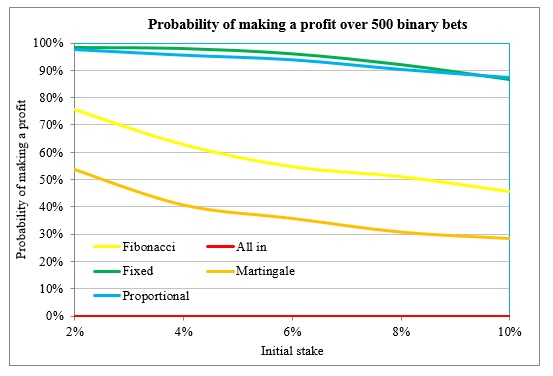 Understandably, reducing stakes relative to the size of the bankroll lowers the risk of going bust and increases the probability of profit, although the size of the expected final bankroll is reduced too. This is simply an illustration of the risk-reward trade-off: if you want more profit, you have to risk more to get it; there are no shortcuts. Nevertheless, for those brave (or stupid) enough to follow a Martingale strategy, even with initial stakes of just $20, you will still face almost a 50-50 chance of losing everything before a 500-wager series has finished. Even with initial stakes of just $1 that probability is still 5%.

What is the best staking method for you?

1)     Progressive , including strategies like Martingale and is risky. Even when you hold a sizeable advantage over the bookmaker there is still a very real possibility that you will go bust trying to recover previous losses, unless you reduce stake sizes dramatically.

This being the case, there seems little point in ever chasing losses. If you’re good enough to beat the bookmaker you have no need to chase losses anyway. And if you’re not good enough no method of chasing them is going to turn a losing system into a winning one. Whilst it might increase the long-term size of the expected bankroll, it does so at the expense of the risk of ‘dying’ trying.

2)     Providing your advantage is significant or your stakes size is sensible, fixed staking should provide the with the means to secure long-term profitability at minimal risk.

3)     Proportional wagering might look like the holy grail of staking, and indeed it has much to merit it, not least that you shouldn’t ever go bust. However, streaks of losses take longer to recover from relative to fixed staking. If you’re in it for the long haul, then proportional wagering is probably for you. If, however, you prefer the feel good factor of short-term gains and believe you hold a sizeable edge, simple fixed staking is arguably the way to go.