In 2016, Pinnacle published my article investigating the accuracy or efficiency of their soccer match betting odds. Once their margin is stripped out and the favourite–longshot bias is taken account of, Pinnacle’s odds for a home win, draw, and an away win in a soccer match provide a very reliable measure, on average, of the probability of any of those results occurring.

It is important to stress the key phrase: on average. Given the considerable amount of variability in the way soccer contests play out, no single odds will offer a perfect prediction of the probability. However, over large samples of odds, errors can be seen to be cancelled out. Therefore, the probability implied by Pinnacle’s fair match odds closely reflects the proportion of specific match outcomes. For example, for a sample of teams with fair odds of 2.00, typically about 50% of them win.

With this in mind, can we investigate the odds efficiency in an Asian Handicap market? In this article, I’ve attempted to find out.

What is the Asian Handicap market?

The Asian Handicap market is a specific type of Handicap market unique to soccer. Normal soccer Handicap markets – similar to those in other markets available for sports such as basketball and football – generally seek to roughly equalise the chances of either side being successful in a bet, by awarding a points advantage (or disadvantage) to one of the sides.

In a soccer Asian Handicap, in addition to full goal and half goal Handicaps, you will also find quarter and three-quarter goal Handicaps where special rules for bet settlement (with half-wins and half-losses) apply. Most of you will be familiar with how Asian Handicaps work, but for those new to it, Pinnacle have provided a primer.

How do we compare Asian Handicap lines to outcomes?

While Asian Handicap odds can be translated into implied outcome probabilities, it is harder to compare these to actual results. For match odds, we can simply look at the percentage of teams with specific odds who go on to win. But how can we do this for specific Handicap values? For example, if we have 100 teams with a -0.25 Handicap and fair odds of 2.00, what is the expected outcome?

The solution is to compare Handicaps to actual match goals and specifically the goal difference between the two teams in a match. If the average goal superiority for those 100 teams was 0.25 over their match opponents, this would be evidence of odds efficiency at that sample resolution.

However, a number of further problems exist. Firstly, Asian Handicap markets offer a range of different Handicap values for individual matches. Which one do we choose to analyse? For this exercise, the Handicap I am most interested in is the one that most closely equalises both sides, or where the implied win probabilities are both close to 50%. Typically, this is the most popular Handicap with bettors, seeing the most action and the shortest margins.

Fortunately, we can estimate what the size of the exact 50-50 Handicap should be from the actual odds. We just need to determine how the odds change as the Handicap changes.

How do the odds change as the Handicap size changes?

The easiest way to illustrate this mathematically is with a Zero-ball Handicap, where both sides are more or less evenly matched. Consider the following example:

The table below shows a set of odds for different Asian Handicaps for a match. You can see that for the Zero-ball Handicap, the odds are the same, implying both teams are evenly matched. For negative Handicaps (applied to the home team), it unsurprisingly becomes less and less likely that they will cover that goal difference, and so the odds become longer and longer. Conversely, for positive Handicaps, the odds get shorter and shorter.

These odds are unfair as they contain the bookmaker’s margin. I’ve removed them using the Odds Ratio methodology, which takes into account the favourite–longshot bias. Now with the fair odds, we can easily calculate the implied probabilities, as shown in the next table.

Finally, let’s plot the implied percentages of covering a Handicap against those Handicaps to discern a relationship between the two. 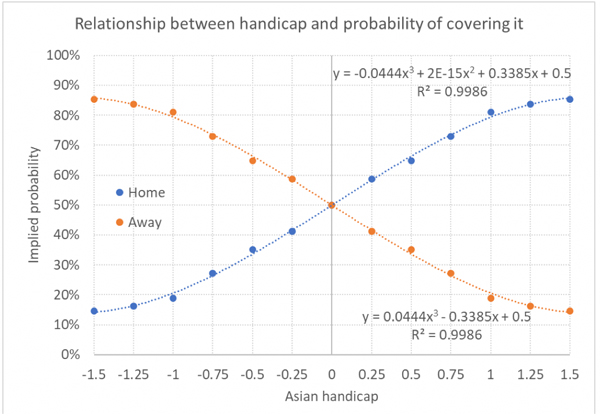 The best fit line to describe the way the implied probability changes as the Handicap changes is a third order polynomial. Using this equation, we can estimate the size of Handicaps where the odds are not exactly the same for each side.

Since the Asian Handicap lines I’m interested in are the ones close to 50-50 propositions, we will only need to concern ourselves with the rate of change of the probability close to the centre line. This means we only need to worry about the linear gradient (or rate of change) of the x-term, and can conveniently forget about the x-squared and x-cubed terms which make it much harder to solve for x.

There is also a third problem: different matches will not show the same Asian Handicap gradient. Most significantly, the greater the expected number of goals a match has, the smaller the gradient will be, since the rate of change of the implied probability will be smaller.

At one extreme, Ajax playing a league game might see an implied probability of 85% for over 2.5 goals (compared to a more typical 50%), as they tend to score a lot of goals in the Eredivisie. For such matches, the Asian Handicap gradient falls to as little as 0.2.

At the other extreme, traditionally low-scoring matches, for example in the French second division (which has an implied 25% probability for over 2.5 goals), will show gradients as high as 0.38. The chart above came from a game where the odds for over 2.5 goals were 2.2. After removing the margin, the implied probability is 42%.

Using a set of seven matches with variable expected goal scoring, I plotted how the Asian Handicap gradient varied with the implied probability of over 2.5 goals. The chart below reveals a linear relationship, whose equation can now be used in conjunction with the over 2.5 goals odds for every match to define a specific Asian Handicap gradient for each one, and hence more accurately calculate the 50-50 expected Handicap figure. 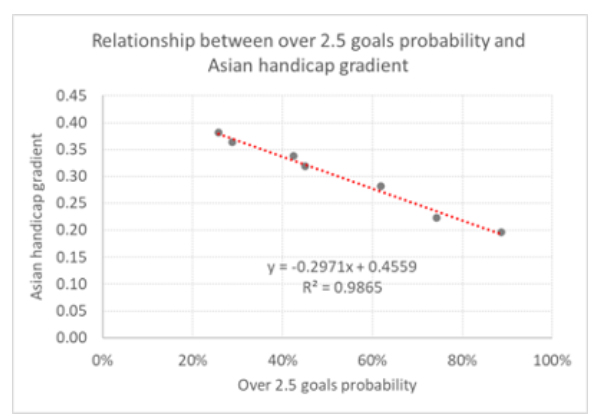 I have collected Pinnacle’s closing Asian Handicap odds since the start of the 2019/20 season. Removing matches with missing data, I am left with a total of 7,629 matches from 22 European divisions up to and including October 4, 2020. By following the procedure above, I calculated the 50-50 expected goal difference between competing teams for each match. 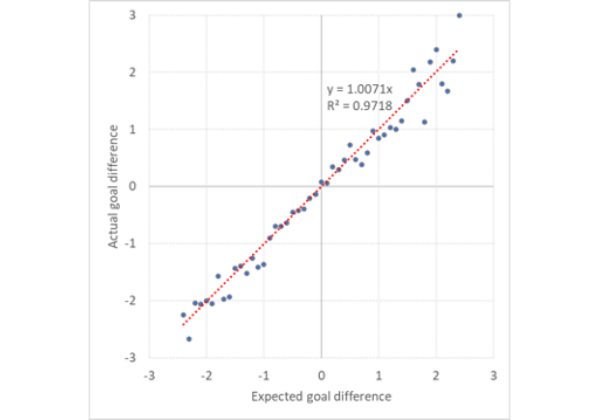 The most striking aspect of this chart is how excellent the relationship is given the relatively small amount of data used to create it (50 times less than for the match odds analysis in 2016). The gradient of the line is almost exactly 1:1 and the lack of variance implies a high degree of accuracy in the calculated 50-50 Handicap values, and hence in the underlying Asian Handicap lines from which they come.

Of course, the efficiency revealed in the chart only implies that lines are efficient at the resolution of 0.1 Handicap points, given this sample size. At the much smaller resolution of individual games, there is a huge amount of underlying variability. The following chart plots the expected goal difference against the actual goal difference for all 7,629 matches. 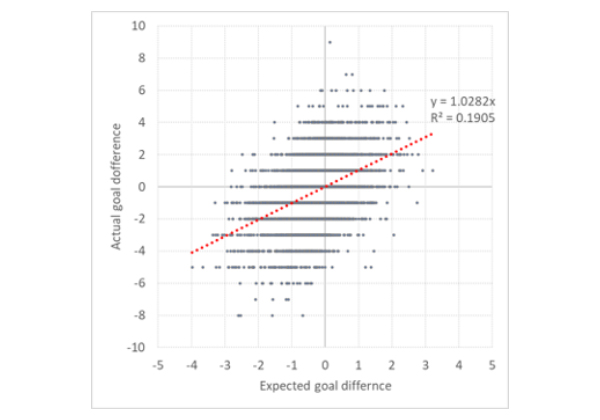 Yes, there is still good fit between expected and actual goal difference, but less than 20% of the variability in the latter can be explained by the variability in the former modelled from the Asian Handicap lines. The rest will be accounted for by a multitude of other hidden variables, mostly too complex to model, which we call noise or aleatory uncertainty.

Those hoping to uncover some of these hidden variables to improve their prediction model over Pinnacle’s Asian Handicap lines will face a tough task. The deviations between expected and actual goal difference look largely random. The distribution of those deviations is shown in the histogram below. 70.0% and 95.0% of them occur within one and two standard deviations of the mean respectively. A wholly random (normal) distribution would have figures of 68.3% and 95.5%. 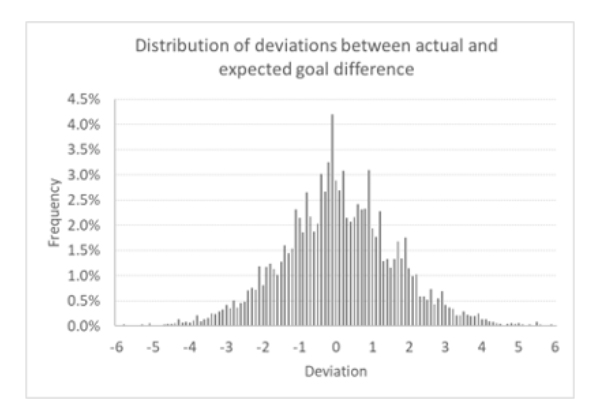 To sum up, yet again we have found that another of Pinnacle’s betting markets, the soccer Asian Handicap market, appears to operate at a highly efficient level. Yes, there are many deviations from expectation in games, but those deviations are largely arising from luck.

To make systematic profits from them will require a more sophisticated goal prediction model than Pinnacle’s. Good luck trying to build one.