There are a number of factors that are theorised to contribute to home field advantage to some degree and these have been outlined below.

The home crowd and refereeing

There is some evidence of home team bias when it comes to refereeing decisions. The change in penalties awarded since the introduction of VAR to certain soccer leagues gives a good indication of this.

Whilst penalties are fairly rare events that have a relatively limited impact on the overall home field advantage, the home team bias demonstrated since the introduction of VAR implies that referees could be favouring the home team when making other decisions within a match.

There is some evidence that a team’s familiarity with a venue can contribute to home field advantage but it may not be as significant as other variables.

Read: Is a new stadium a disadvantage?

Logically teams that have to travel long distances may suffer a disadvantage compared to teams playing in their home stadium. However, the effect of travel on athletes has been studied extensively and results are inconclusive concerning whether air travel has a detrimental impact on performance.

There have been various other potential contributors to home field advantage investigated including testosterone, altitude and extracurricular distractions. Dominic Cortis has provided an in-depth explanation for some of these other potential causes of home advantage in this article.

Which soccer league has the biggest home field advantage?

The best way to do this is by looking at the average goal difference achieved by home sides (home goal advantage) as this will be a more accurate reflection of any potential advantage compared to simply looking at results.

For example, by looking solely at match results, Manchester City beating Huddersfield by eight goals to one at home and then winning by a single goal in the reverse fixture would be counted as the same outcome. Home goal advantage demonstrates that Huddersfield performed better at home.

For example, by looking solely at match results, Manchester City beating Huddersfield by eight goals to one at home and then winning by a single goal in the reverse fixture would be counted as the same outcome. Home goal advantage demonstrates that Huddersfield performed better at home.

As the table shows, the MLS is quite distinct from the big five European soccer leagues due to the level of home field advantage enjoyed by home teams.

It is no secret to bettors that home field advantage exists in soccer but how inline is home goal advantage with the betting markets?

The market agrees with La Liga’s stronger home field advantage but actually rates the Premier League as the league least friendly to home sides. However, the difference between the Premier League, Ligue 1 and the Bundesliga is marginal.

The home goal advantage is also much more variable than the home field advantage implied by the Pinnacle closing line odds: 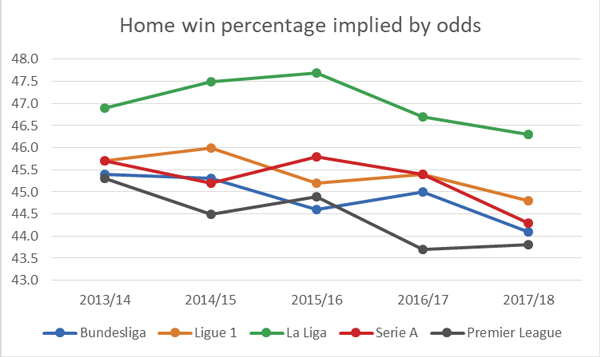 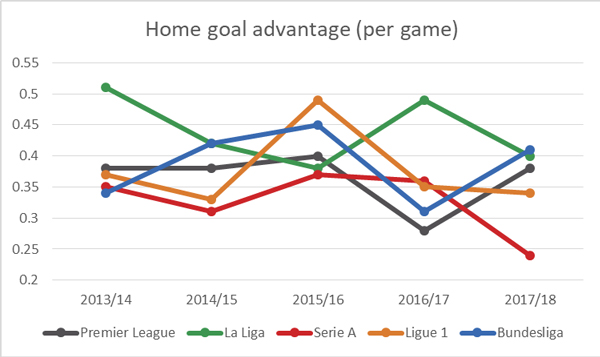 There is only a moderate 0.46 coefficient of correlation between home goal advantage and Pinnacle’s closing line odds.

There are two potential reasons for this. Home advantage is not particularly variable and the big swings in home goal advantage are due to variance correctly ignored by the closing line odds. Alternatively, the market is not efficiently calculating home advantage and lags behind the actual swings.

Home field advantage in other sports

Home field advantage is also a factor in the major US sports. In fact, it is even more pronounced due to the removal of the draw result. 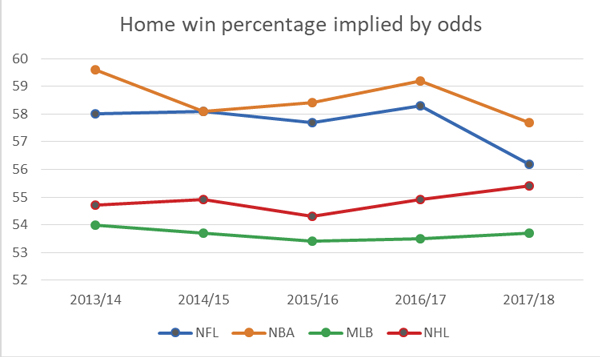 Home court advantage is a much-discussed topic in the NBA and it is easy to see why. According to the closing line odds home teams are more dominant than in the other three major leagues. The NFL possesses a similar home advantage but sample size here is small since most teams play just eight home games per season.

Interestingly, the MLB (where teams play the highest total number of games on the road) ranks the lowest in terms of home field advantage implied by the odds.

What should bettors know about home field advantage?

Given how efficient the Pinnacle closing line is at predicting match outcomes the market does a good job at factoring in home field advantage. However, that does not mean that inefficiencies will not appear occasionally for enterprising bettors.