The Monty Hall problem is a prime example of how, when presented with the simple challenge of selecting one favourable outcome against two unfavourable outcomes, we display a basic inability to correctly weigh up the chances of success.

This is crucial for bettors because in simple terms, if a bettor cannot recognise implied probability and whether a bookmaker’s odds represent ‘value’ they will never make any money in the long term.

A brand new car is behind one of three doors. Behind the other two is a goat. You must correctly guess which door hides the car in order to win it, but you have no prior knowledge that allows you to distinguish among the doors.

After you choose a door, one of the other doors opens to reveal one of the two goats. You now have another option – do you change door, or do you stick with your original choice?

"The probability that the car lies behind the remaining door is 66.6%"

Named after the host of “Let’s Make a Deal”, a popular US show in the 60s & 70s which formed the basis of the poser, the Monty Hall problem is a seemingly simple mathematical puzzle which effectively demonstrates how people struggle with what appears to be a very straight-forward choice.

With this simple yet cleverly posed teaser, the show demonstrated how the average person can demonstrate counter-intuitive behaviour when faced with probability conundrums – and the same is true of casual bettors. When this question was posed in parade magazine, 10,000 readers complained that the published answer was wrong – including several maths professors.

The solution to the Monty Hall problem is simple: always switch doors. After the first door is opened, the car is definitely behind one of the two closed doors (although you have no way of knowing which). Most contestants on the show intuitively see no advantage in switching doors, assuming that each door has an equal (1/3) probability.

This is incorrect – in fact, the chances of winning the car double by switching. While it is true that originally each door had a 33.3% chance of hiding the car, after the first goat is revealed, the probability that the car lies behind the remaining door is 66.6%.

It is easiest to calculate these probabilities by imagining that you’re picking between your original door (33.3% probability) and the combined probabilities of the other two doors (33.3% + 33.3%). This is because once you choose your door, the other two are then paired together – there is a 66.6% chance it is behind one of those two doors. When one is then removed, there is still a 66.6% chance that the car lies behind the remaining door. See the example below: 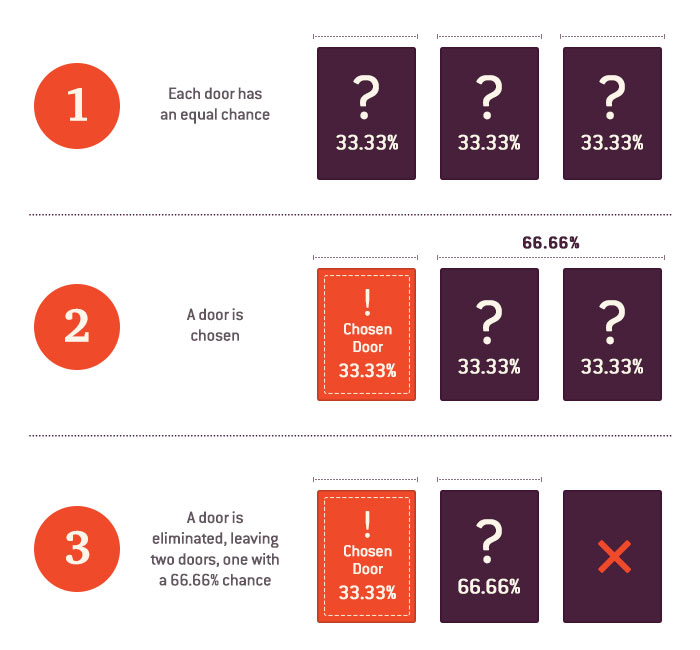 Knowing when the odds are against you

This problem cleverly illustrates how easy it is to fall into the trap of treating non-random information as if it were random. The UK TV show “Deal or No Deal” – involving 26 unopened boxes containing varying amounts of cash – pays homage to “Let’s Make a Deal” by exploiting the general public’s weak grasp of probability in a similar way, as contestants fail to understand when they are in a statistically strong or weak position, and instead act on false ‘gut feelings’ about chances of success (see our article about heuristics in betting for more information on this).

Such notions are all too common mistakes when bettors frequently act against their best interests, particularly when bamboozled by clever marketing ploys, or encouraged to indulge in betting as a lifestyle choice rather than a question of mathematics.

Betting requires the skill to understand whether the odds offered on an event represent the statistical probability of that event occurring. It doesn’t matter if it’s a game show, playing the lottery or online sports betting, understanding and finding value, is the key to profit.