http://www.pinnacle.com/en/betting-articles/Betting-Psychology/optimism-bias-in-gambling/SE5JTNY85W72GMSZ
We have all dreamt of being rich and this is one reason why people buy lottery tickets, even if the odds of scooping the jackpot are depressingly low. But how low are the odds exactly and what can you do instead to make money?

The human brain can be brilliantly rational. But sometimes, we act in irrational ways. This is what psychologists call cognitive bias. When we know about cognitive biases we can improve our decisions, and in the case of gambling make money, or at least avoid lightening our wallet.

What is optimism bias

Optimism bias is the tendency to think that we are less at risk of experiencing a negative event compared to others. When we are part of a group of peers, optimism bias translates into “not-me” bias making the odds of being hit by an unfortunate event look remote.

Interestingly enough, optimism bias works the other way round too for positive event. When it comes to pleasurable events, our brain tends to exaggerate the chance of low probability events to occur, which is why lottery players continue to buy tickets week after week.

Classic examples of optimism bias include smokers believing they are less likely to contract lung cancer than other smokers and traders who think that they are less exposed to losses in the markets.

If I won the lottery…

Behavioural studies have shown that the human brain is not good at dealing with very small odds.

We realize, for example, that fatally slipping during shower is unlikely, but we have no sense of how unlikely. Is it more or less unlikely than dying in a terrorist attack while on-board? What about dying from accidental alcohol poisoning?

To demonstrate the irrationality of decision making when it comes to events with low probability, Nobel prize winner Kahneman conducted an experiment regarding the purchase of insurance. A group of Americans were offered the option between insurance against their own death in a terrorist attack while travelling to Europe and another group insurance that would cover death of any kind for the same trip. Even though "death of any kind" includes "death in a terrorist attack", the first group were willing to pay more than the latter.

“If you are in middle age, and good health, your chance of death within the next year might be one in a thousand. That means your chance of death in the next hour is about one in nine million…If the winning numbers are drawn at 8.05pm, and you buy your one ticket before 7.20pm, you are more likely to expire before the draw is made, than win a share of the jackpot (Sorry)”

To put it differently, if you spent $1000 on a 6/49 Lottery for $1 a ticket every weekend for 270 years you would on average be expected to win one Jackpot.

So why do we persist in buying lottery tickets, since we are faced with such odds? The short answer is that our brain blocks out the less savoury but more probable outcomes and here’s how it does it.

Since our brain is not well equipped to evaluate small probabilities, what it does instead, is to rely on whether it can picture the outcome - also known as the availability bias.

When it comes to lotteries, winners are often highly publicised. This can have a long lasting impression. You might, for example, find yourself wondering “If they can do it, why can't I?", which makes the idea that wins are regular appealing, when in fact they are rare.

After the World Trade Centre was hit, the image of terror attacks killing lots of people is easy to bring to mind. It doesn’t matter that the chance of fatally sipping in shower (1 in 810,000) is about 31 times more likely than dying in a terrorist attack while on board (1 in 25 million). People are more obsessed about terrorism than showering. 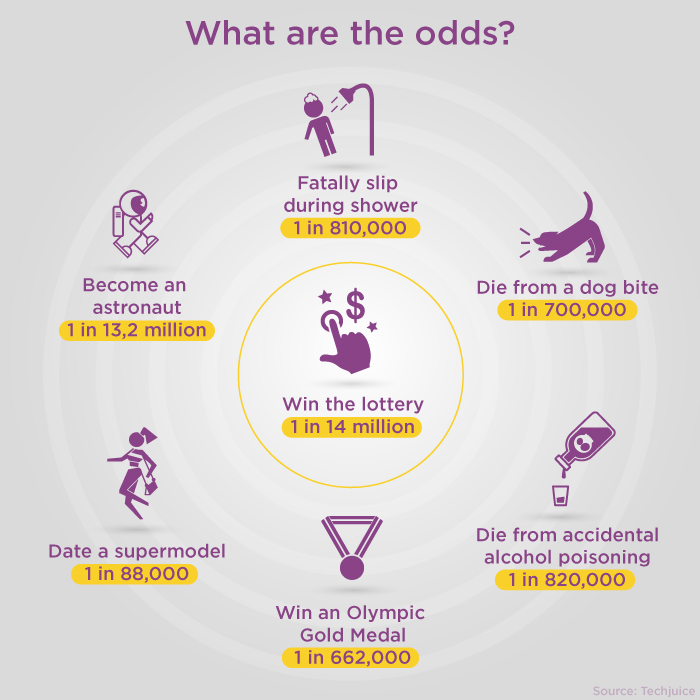 Survival of the mathematically fittest

Wondering why lotteries continue to be so successful, although buying lottery tickets is a gambling strategy with negative expected value? Beyond the basic reason that hope dies hard, there is yet another bias that reinforces the behavior.

In activities of pure chance psychological rewards such as the “near miss”, (i.e. failures that are close to being successful) are seen as signs that raise the chances of winning, whereas in reality such information gives zero insight on the likelihood of future success.

As much as we like to think of ourselves as rational creatures, even smart people fall prey to one bias or another and it is almost impossible to know which bias will be applied in a given situation. To make matters more complicated, it is also possible for the same person to use a different bias in the same situation on different occasions.

Hoping to win the lottery is one way to invest your time and money. Another is to develop a strategy with positive expected value and apply it consistently. Statistics suggest you are better off with the latter.