The term “hot hand” originates from basketball, where a player’s probability of hitting a free throw is believed to be higher after a hit than a miss on the previous shot. In sports betting scenarios, the term is used to describe a bettor with a persistent winning record. But is the mysterious “hot hand” scientifically proven? Read on to find out.

A research conducted by Juemin Xu and Nigel Harvey at University College London investigated the hot hand effect, by examining the betting history of over 700 players who placed a combined number of 565,915 bets over the course of 2010. Read on to find out whether the belief is indeed a fallacy or not.

When luck swings your way

The researchers examined the phenomenon of winning streaks in betting by assessing the probability of winning after different lengths of previous wins.

"From a statistical point of view, subsequent outcomes are independent from each other"

By checking the results of the next bet of the players who had tree consecutive wins, the probability of a fourth win went up again to 0.67. The players without the run of lucky predecessors, however, exhibited a probability of winning of only 0.45.

The data strongly suggested the existence of a hot hand effect in betting, but is it true that bettors with long winning streaks are consistently luckier than others or is there another explanation hiding behind the façade of logic? 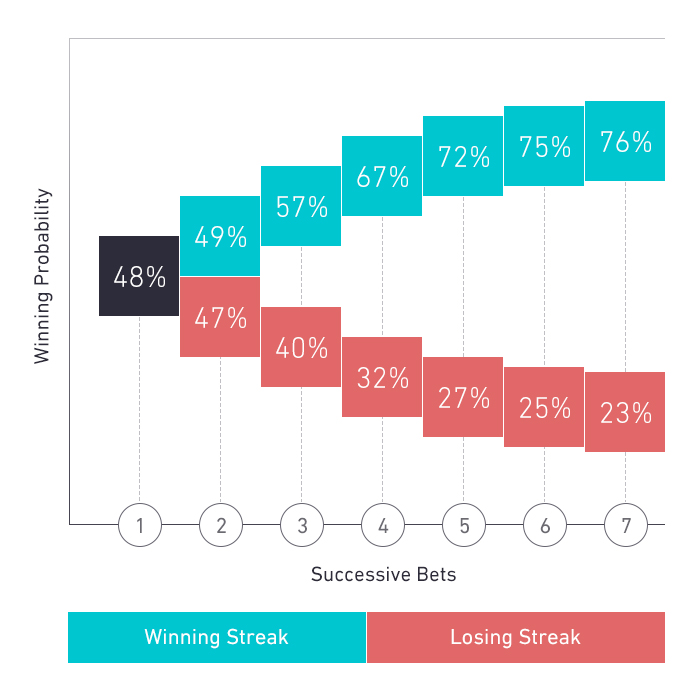 From a statistical point of view, subsequent outcomes are independent from each other. It is, therefore, surprising that Xu and Harvey found evidence in support of the hot hand effect.

In the next experiment, the research focused on how the result of a bet affected the odds of the next bet. In the first phase, the mean level of selected odds of all bettors was 7.72. After the first bet, though, significant changes were observed.

The winners exhibited the tendency to choose lower bets, with the mean odds decreasing to 3.60. As the consecutive wins continued, the trend of less risky odds continued too.

"What the experiment proved was that by believing in the gambler’s fallacy, bettors created their own luck"

The opposite was found for losing bets. Those who had lost on more consecutive occasions, tended to select riskier odds. After six winning bets in a row, the figure for mean odds dropped to 0.85, as opposed to 17.07 for bettors with six losses in a row.

What the experiment proved was that by believing in the gambler’s fallacy, bettors created their own luck. Winners worried about running out of luck and selected safer odds. By getting more risk averse, they also became more likely to win. The losing bettors, on the other hand, took riskier odds in the belief that the big win is just around the corner, making themselves even more likely to lose.

The ultimate gauge of betting success

And the million-dollar question of course is whether the winning-streak players were more profitable than non-streaky ones. By comparing the overall returns for bettors who had at least one streak of six successful bets in a row and for those who didn't, the difference showed that non-streaky bettors were marginally better off, with winning-streak players having an average loss of €1.0078 for each pound they bet and non-streaky ones an almost identical of €1.0077.

So, whether you are on a winning or a losing streak, I have one piece of advice for you. Don’t believe everything you think.