This article will give you insight into scoring efficiency, how the three-point line is made use of in the modern NBA era (since 2010), why the use of the three-point shot has increased and how Stephen Curry and the Golden State Warriors (GSW) used efficient scoring to win their elusive 2014-15 Championship.

It has been over three decades now since the introduction of the three-point line into the sport of basketball. While not a part of the original 13 rules of the game, it’s become a crucial part of basketball and over the last 5 years has become a major focal point within the NBA.

To start this article properly I would like to take you back to the start of the 2013 – 2014 NBA season. LBJ and the Heat already had a star-studded roster of players and role players that were coming off of an NBA Championship season having beaten the San Antonio Spurs 4-3 in the NBA finals.

Yet as soon as the season started something was different. As most know, LBJ and the rest of the Heat starting five were already clicking but one player began to stand out more and more from the bench. That player was Shane Battier.

Battier is not your average player. He studied game film day in and day out since 2009 when the NBA incorporated video analysis across the league. He began looking so deep into player tendencies that it intrigued coaching staff across the league who wondered “what if….?”

The above might seem like just another anecdote but it is exactly the point in time when we saw things were going to change.

Obviously other cogs were also at play. Executives such as Sam Hinkie (Forer PHI front office exec.), Darryl Morey (current GM of HOU), Bob Myers (current GSW GM) all began looking at how numbers and statistical analysis were becoming effective at the back end of the league.

The rise of the three-point shot

Truth be told, the inception of the three-point line, which happened back before the 1979 – 1980 NBA season was an intentional gimmick that changed the course of the game by adding to the original 13 rules of the sport we know as basketball today. 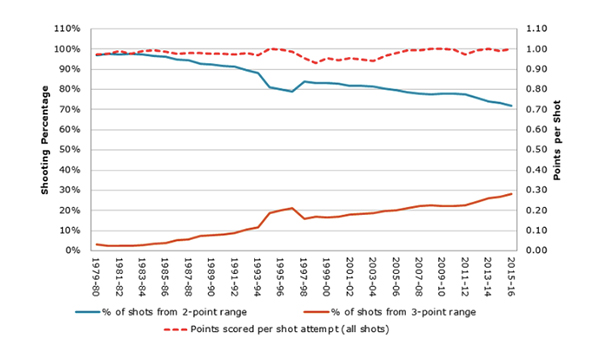 Above is a compiled chart that clearly shows that since the three-point line was introduced scoring tendencies have drastically changed across the NBA.  But how does this prove the point that shooting the ball behind the three-point line became that much more of an efficient shot?

Well one obvious answer is the fact that the value of the shot taken is now higher to a casual observer. However, in order to be able to understand this more clearly let’s have a look at the chart below: 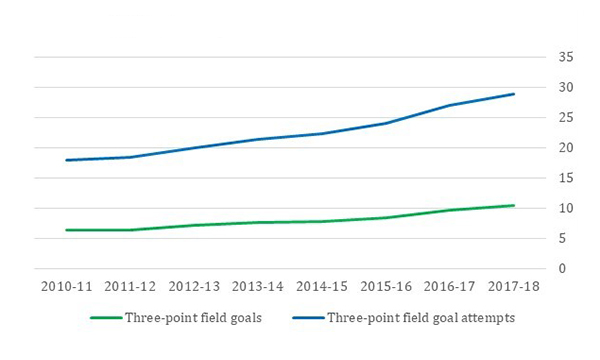 Over the last 8 NBA seasons ranging from 2010 – 2018 attempts of three-pointers have drastically increased as teams have understood that it takes a lot more to be able to score and, as a result, attempt to become more efficient.

Naturally, while one shot type increases another decreases. Based on basketball-reference.com data, where all the data in this article comes from, the staple shot of the NBA from the mid-80s to the beginning of the 2000s had been the mid-range shot.

One thing all teams have unanimously come to the conclusion of has been that attempting three-point shots, especially from the corner, statistically give you a 20% - 35% higher chance of winning games based on win probability added calculations. These calculations are widely used across league analytics personnel of both teams and data scientists.

Get the best odds for nba betting

Bob Myers, GM of the GSW has been one of the top tier GMs that has placed a key value on winning by focusing on effectively playing the numbers.

Golden State have thus far been successful in allowing their prime player, Stephen Curry, to take effective shots from behind the arch (close to the middle of the court) with ease. Klay Thompson effectively assists Curry for these three-point shots. They have earned their “Splash Brothers” nickname by leading the league for three-pointers.

It can easily be said that the notion of efficient scoring in the modern NBA era had become a trend which effects betting odds. Bettors can place bets more effectively based on advanced stats which are now available to the public.

If I were to add in a definitive comment, the effectiveness of the three-pointer is evident. It has allowed for an increase in scoring taking the NBA wide scoring average back up to the 100 – 101 point mark which is similar to when the three-point line was first introduced.

However, an interesting trend has become much more noticeable. Positionless players who are unlike the traditional guard, forward and centre positional players, have appeared due to the upward trend in three-pointers.

With more and more positionless players in the league the mid-range shot or “long-two” could make a comeback whilst the effectiveness of the “and-one” will gradually come to light.

Bettors should keep an eye on stats.nba.com. It is the most transparent statistical webpage available publicly. This data can guide you towards understanding how teams make use of player tendencies.