I have been searching for a way to provide further insight on the upcoming 2018 – 2019 NBA season. While most simulations carried out consist of data and being able to work on play-by-play or data points that are generated once the season starts I wanted to take different approach this time.

I have been focusing on how to offer some in-depth insight on how teams will look for the upcoming season beyond the raw data.

So without further ado here is what the simulated table for next season looks like according to the Net Rating projections: 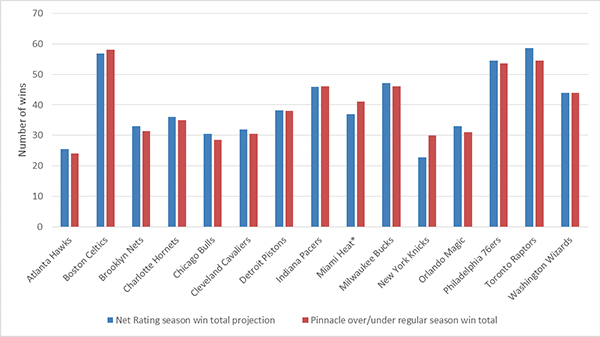 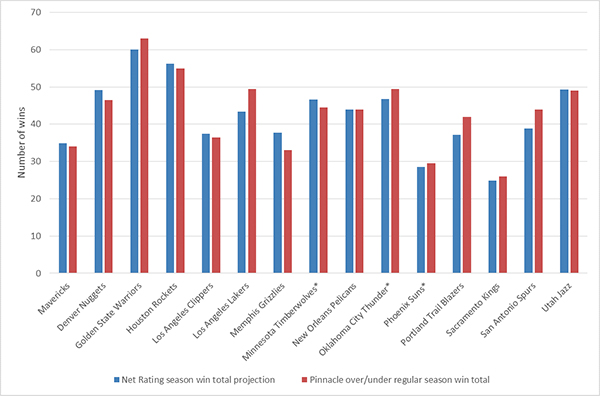 Please be aware that these are simulated figures and even though they are aggregated and cross-checked based on my peer Kevin Pelton’s calculations they only project probable outcomes.

The Cavs are now rated as one of the worst teams in the Eastern Conference and the East as a whole has lost power due to the departure of LeBron James (LBJ). However there are other storylines that have impacted this, including the shift in cap space as well as luxury tax movements. A majority of teams are already thinking two to three seasons ahead and free agent players will ideally be looking for max contracts.

The biggest surprise for me by far are the New York Knicks (and not just because I do lots of work for them). Overall the fact that the team has not had a great free agent acquisition period is by far the major reason why they are only projected to win 22.9 games.

What are the key inner conference matchups?

Due to this, to me, there will be 4 or 5 key matchups throughout the season to keep an eye on. These include:

The above matchups will be the inner conference games that will determine how these preseason projections playout.

These are the key matchups that I will dig deeper into in an upcoming article and discuss roster depth and how they are further going to impact the entire league.

The effect of new rule changes

These projections also take into account the new rule changes that will be set in motion. Bear in mind that offensive and defensive ratings and eventually Net Ratings are incumbent on points per 100 possessions.

As a result, the fact that the new rules could speed up the play may actually make the league more prone to higher scoring games. This will eventually mean that the superteams (teams that have potentially three or four all-stars) will have an even easier route to the playoffs and conference finals.

Aside from LBJ moving to the Lakers, I feel that the disintegration of Kawhi’s relationship with the Spurs is the story that eventually will impact the league. The Toronto Raptors will benefit from the addition of Leonard.

The fact that Toronto and Boston being placed as the 1 and 2 seeds in the East are no doubt the major talking points. A healthy Kawhi Leonard and the revamped Raptors will join Boston as the top two projected seed in the East.

The Celtics are the team to watch in the east

Alongside the Raptors, the pivotal team in the Eastern Conference as I see it is the Boston Celtics. A healthy Kyrie Irving and Gordon Hayward will bring much–needed energy and production making Boston a must-watch roster.

Mitchell and Doncic could prove pivotal

Donovan Mitchell of the Utah Jazz has seemingly had a quiet summer. However, from workouts and footage, as well as information from people I have spoken to (including Black Ops Pro Run holder Chris Brinkley), it seems that Mitchell has added a few weapons to his arsenal as well as improving his quickness on defense.

As a result, the Dallas vs. Utah series I pointed out before could be important. The fact that Dallas have rookie Luca Doncic coming off an MVP season from the Euroleague and the ACB (Spanish top level competition) is interesting. Doncic’s addition could significantly impact their Net ratings for better or worse depending on how he transitions to NBA basketball.

In the grand scheme of things, the Net Ratings tell a solid story throughout the league. Cap space and team values, as well as free agency and the associated the max contract issues faced this off-season, have allowed a dynamic shift in the league.

Will this cause a major shift in power? I doubt it. However, whether it means another Golden State Championship remains to be seen.

One thing I have noticed more lately is that many of the star players, all-stars and potential breakout rookies or sophomores have been pushing quite hard in the off-season. Healthy players need to rest well and rest analytics have been a major topic this off-season among my peers. It seems guys like LBJ usually spend around 38% of their off-season relaxing while other players spend less time doing so.

As soon as the pre-season games and the training camps kick in we will be able to see how the addition of rest to the numbers game ends up effecting the Net Ratings projections.

Get the best NBA Outright Odds ahead of the 2018/19 season with Pinnacle.