Our resident basketball expert Ermay Duran analyses the potential advantageous impact that fouling can have in the deciding the outcomes of games, especially in the final seconds of matches. Read on to inform your next bet on the NBA.

The value of possession

Back in 2015 when invited as a guest by MIT to the Sloan Sports Analytics Conference I came across a good bit of research on how in game fouling had become a concept that the league that is affecting outcomes of games.

The overall point of the research paper had the following outlined points:

• Fouling stops the shot-clock earlier than shooting. Even if you wait 3 or 4 seconds, the possession is still much shorter than what you would need until you get a half way descend three point shot off

• It easily doubles the number of possessions

• Increased number of possessions increases the variance of outcomes

The last point above is crucial. If you have two times more possessions, the variance increases by square root of two given that the number of possessions would only double is a very weak assumption.

Knowing when, how and whom to foul is such a vital issue

While overall the research pointed out an issue there was some major nonsense attached to it, yet digging deeper about it here are a few things I ended up uncovering.

Predicting win probability has become a mundane thing now that there are ways to formulate how much impact players have individually on game outcomes in the NBA however crossing the threshold of how win probability data can be utilized further for the sake and understanding or even setting up a strategy of when to foul in different situations is partially a re-vamped idea. 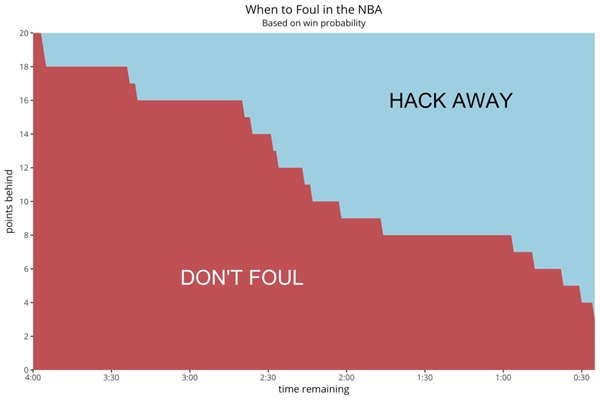 As it can be seen in the chart shared, there is a clear indication of when teams should and should NOT foul at given time frames of the end of a game.

Does this mean anything to coaching staff? Well to the ones that are strategic enough we can definitely say, YES! But the argument goes both ways. It become a given fact that coaches that used to consider the hack-a-shaq rule at points during games really no longer can utilize this due to rule changes.

Players have become smarter about their free throw (FT) shooting and in cases such as DeAndre Jordan (recently traded to the Knicks) we have seen him pull up his FT shooting to reasonable standards.

So where does this leave the loyal betting enthusiasts? Well, watching and analyzing games and teams comes in handy.

I just had an amazing conversation with Dean Oliver (author, close friend and long time mentor of mine).

So as long as knowing the rules of the game are clear and understanding team strategy is clear to you, eventually being able to count towards changing the outcome of the game and being able to predict as best as possible is a viable case.

The above therefore led me to consider that aside from the changes that are occurring in the way the game is played which is much more dependent on the shooting capacity overall of teams, much less stoppage of the game possession value has increased.

Teams that manage to build up win streaks such as in the current case of the Pacers, Raptors, Pistons, Golden State and OKC rely on high pace and medium possessional outcomes of games which also indirectly correlate to the fact that they attempt to foul reasonably less and try to complete games by being fouled less too.

Yet in cases such as The Bucks, The Magic, 76ers, The Kings, Utah and Houston which heavily rely on a more equal points distribution and heavy possession count try to attempt getting stops in the game.

Daily Fantasy information that usually is covered by major betting sites and interested parties usually rarely get into this space but I can say this much; a team that manages to balance out its pace to possessional values has a much better chance and hence makes use of fouling in games in the NBA holds a key to getting some out of the box wins.

As a betting enthusiast and tracker, its good to also knowhow to formulate or see how teams work around the shot clock and managing their time.

There's an old Chinese proverb: "The temptation to quit will be greatest just before your are about to succeed."

Knowing when, how and whom to foul is such a vital issue that while watching a game it can give you added insight into further strategies that you can rely on while betting on future games.

Overall, its best to keep in mind that the game is constantly evolving and tiny nuances such as these affect the outcome of how games are played out.